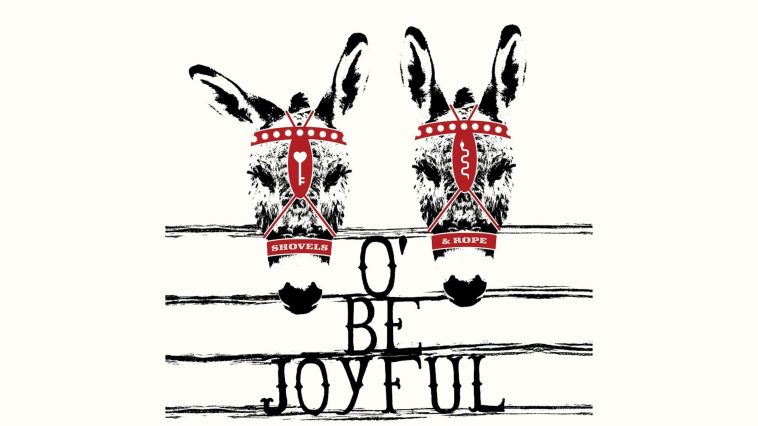 Acclaimed duo Shovels & Rope has announced the July 29th release of the 10th Anniversary Deluxe Edition of their award-winning debut album O’ Be Joyful (Dualtone). Released in 2012, O’ Be Joyful was the critically acclaimed breakout that introduced the world to the exceptional songwriting, emotion and passion of artists Cary Ann Hearst and Michel Trent as Shovels & Rope. Their raw blend of rock, punk, folk and country made a statement and foreshadowed what was to come. The Wall Street Journal said, “Some songs emphasize banjo, fiddle and the raspy country vocals of Nashville-raised Ms. Hearst. On other tracks, the growl of Mr. Trent’s guitar can sound more punk than honky tonk.”

The 10th Anniversary Deluxe Edition of O’ Be Joyful includes an additional disc that features a stripped down, acoustic version of the entire album that the duo recorded at their home studio during the pandemic. Listen to the new renditions of “Birmingham” and “Hail Hail” HERE. This special edition also features all new packaging, new cover art, new photos and new liner notes written by Hearst & Trent. The two-LP package with limited color vinyl is available for pre-order, shipping on December 9th.

Following the album’s release, Shovels & Rope won the award for Emerging Artist of the Year at the 2013 Americana Music Association Awards, while their beloved, autobiographical song “Birmingham” won Song of the Year. The group made their network television debut on The Late Show with David Letterman with an inspired performance of the single and went on to garner a fervent fan base with their incendiary live shows and almost non-stop touring in support of the album. Around the same time, the band was the subject of the much-loved documentary film The Ballad Of Shovels & Rope (View Trailer).

A Shovels & Rope show is a highwire act as the couple play multiple instruments, often at the same time. Their fiery vocals offer soaring harmonies with an edge. Hearst and Trent do not look lovingly into each other’s eyes and sing to one another, they sing at each other, each pushing the other to leave it all on the stage every night, and the audience loves them for it. Paste Magazine said “… Hearst and Trent share a remarkable chemistry” while LA Weekly stated, “Onstage, they trade off on guitar, ‘junkyard’ drum kit, harmonica, keys and other instruments, all adding up to a helluva beautiful racket.” See a list of upcoming Shovels & Rope tour dates below.