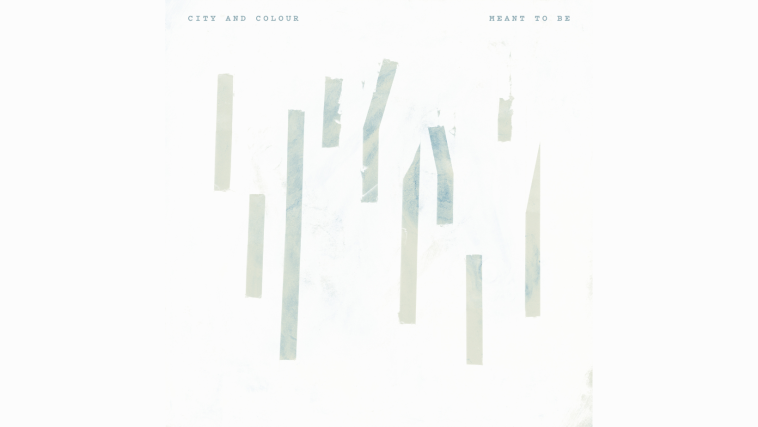 Acclaimed artist City and Colour, the moniker for singer/songwriter Dallas Green, has just released the emotionally powerful new track “Meant To Be” via Still Records, an imprint of Dine Alone Records. “Meant To Be” is the first new music from City and Colour since the 2019’s acclaimed album A Pill For Loneliness, and comes following a painful, life-changing loss.

The hauntingly melodic song begins with Green’s affecting vocals slowly swelling into the impassioned refrain questioning destiny following a tragic event. In September of 2019, while the band was on a break during an Australian tour, Green received the news that his best friend and longtime City and Colour producer Karl Bareham drowned while visiting country’s Gold Coast. While still emotionally distraught, Green was requested to identify his friend at the morgue, a chilling experience he still carries with him.  As he puts it, “That was the hardest moment I’ve had in my entire life. It changed me forever.” Combined with navigating personal issues upon his return to his native Canada and a global pandemic, Green was completely overwhelmed and struggled.

As he began to cope, the lifelong songwriter Green had not set out to write about the loss; in his heart and soul he had no idea how he would. But suddenly one day, a line came to him, “the sun kept on rising”, followed by a melody. Green wrote it down and stepped away because it was then that he knew he was on the correct path to honor his dear friend.

Writing “Meant To Be” turned out to be a much-needed pure and cathartic experience for Green. The song is a beautiful, heart-wrenching and fiery elegy that resonates deeply. Listen to “Meant To Be” HERE.

About City and Colour
Over the course of six studio albums, Dallas Green has compiled a canon ripe with songs born of adoration and devotion amassing a legion of fans worldwide and garnering him 3 JUNO Awards, including two for Songwriter of the Year, plus 1 Triple Platinum, 2 Double Platinum, 1 Platinum, and 1 Gold certification at home in Canada.

Alongside these accomplishments, Green has been awarded Platinum-certification for all four of Alexisonfire’s full-length records.

City and Colour’s last studio album A Pill For Loneliness – released on Green’s Still Records, an imprint of Dine Alone Records – debuted at #1 on Billboard’s Canadian Albums Chart, his 4th consecutive chart-topper in Canada. His previous #1 LP If I Should Go Before You made serious waves internationally debuting at #16 on the U.S. Billboard 200 Chart and #5 in Australia where Green’s LP Little Hell was certified Gold. In 2014, Green collaborated with international superstar Alecia Moore (aka P!nk) on a new project titled You+Me. The duo’s acclaimed Platinum-certified first record, rose ave., debuted at #4 on the U.S. Top 200 Chart, #1 in Canada, #2 in Australia culminating in memorable performances on The Ellen Show and Jimmy Kimmel Live.

Green was personally invited by Alice in Chains to perform alongside Metallica, Korn, members of Soundgarden, Jane’s Addiction, Nirvana and other legendary artists when the Seattle quartet were honored as the recipients of the 2020 Founder’s Award from the Museum of Pop Culture (MoPop).  In 2022, Green was honored with the SOCAN National Achievement Award at the JUNO Awards in recognition of his philanthropic contributions to music education in Canada.

Listen and view “Meant To Be” visualizer via YouTube

Look for upcoming news about City and Colour

For US press information about City and Colour, please contact Jim Flammia jim@alleyesmedia.com at All Eyes Media