That’s Mary Beth Richardson, lead vocalist of the beloved roots rock outfit Banditos. She’s talking about the song “On My Way,” a standout track off the band’s genre-defying new album Right On, on Egghunt Records. But she gets at the core of what makes Banditos so special, the secret sauce that built a rabid following for the Nashville-based, Birmingham, AL-born quintet, who first burst on the scene with their acclaimed self-titled Bloodshot Records debut in 2015.

Right On is the third studio album from Banditos, following 2017’s ambitious, kaleidoscopic Visionland, an album that signaled a greater well of potential from Banditos and their chameleonic, ever-evolving sound. In a way, Right On is the final piece of one hell of an introductory trilogy, one that shows just how far the band has come since forming while signaling a dynamic, exciting future.

The band — Mary Beth Richardson (vocals), Corey Parsons (vocals, guitar), Randy Wade (drums), Jeffery Salter (guitar) and Stephen Pierce (vocals, banjo, bass) — wrote and recorded Right On with producer Jordan Lehning (Caitlin Rose, Joshua Hedley) in late 2019, wrapping up the project barely a month before the COVID-19 pandemic ground the music industry to a screeching halt. It’s been a long time for the prolific, energetic band to sit on new material, but that passing time has only served to underscore just how special this music is. “We’re excited about getting her out there,” Richardson says of Right On. “She’s been ready.”

Taking a communal approach to writing songs, the band first began work on Right On in 2018, doing much of their writing and brainstorming in Salter’s garage. “We came up with a lot of the ideas with riffs. The guys hammered out ideas that they had [on guitar] and then slowly started putting together a song. Then me or one of the lyric writers put lyrics over it that we felt fit.”

The first tune they came up with was “Deep End,” a party song with cosmic origins. The song, which would feel just at home at a festival as it would a honky-tonk, was inspired by the photograph of Earth known as the “Pale Blue Dot,” taken 3.7 billion miles away by the Voyager 1 in 1990.

“These lyrics came from thinking about being a very small in the middle of space, and coming to grips with it,” Richardson explains. “And how things aren’t as big as you feel like they are. Because we’re all nothing and everything. We’re just little specks in space. We’re not insignificant, but everything is connected. That song is realism meets a mushroom trip.”

While years spent touring certainly honed and expanded the band’s sound, a shakeup in the band’s lineup also brought fresh perspective to the songs on Right On. After the departure of their longtime bassist, Pierce learned to play the bass himself, bringing his own new style of playing to the proceedings. Pierce and Wade quickly found a groove together, bringing new rhythmic possibilities to the band.

“Steve’s always been the funkiest one,” Wade says. “He played banjo, which is already four strings and the same tuning, so it really made sense. And you have to be really tight rhythmically on the banjo to make it sound right. So once he got used to the bass itself, he got really creative. It was a really exciting change because we play off of each other really well.”

Richardson’s move to lead vocalist also reinvigorated the band’s process, as some of the album’s tracks were written with her powerful, versatile voice in mind. “I’m still kind of figuring it out, but I’m excited,” she says of her new role. “And when I’m on stage, I feel like I can actually express my inside on the outside in ways I can’t do otherwise. It feels good.”

Lehning, too, was a key player in bringing this new iteration of Banditos together, leading sessions at his backyard studio in East Nashville. In between takes, the band had an array of toys and games — like ‘90s favorite Goldeneye on Nintendo 64 — to play with in the studio, which Lehning keeps on hand to help artists stay in a creative, playful mindset.

“Jordan’s a good buddy,” Richardson says. “It was very homey, very much a ‘buddy’ kind of energy. He knows what it takes to make artists comfortable and relaxed. So, we were just a bunch of grown kids. He had some really cool sounds and ideas for us and we would bang them out, however long it took, then drink some tequila and do it again.”

This newfound energy can be heard all over Right On. Opener “Time Wasted” is a high-octane, melodic ode to reclaiming one’s time from an ambivalent lover. Richardson’s soulful vocal is at once empowered and a bit vulnerable, hinting at the heartache at the song’s core without sacrificing an ounce of strength. A hard-driving rhythm from Wade and Pierce only heightens that strength, as crunchy guitars and harmony vocals create a rough-hewn wall of sound.

“Waves” plays with the dynamism of both Richardson’s voice and the band as a unit, punctuating subtle, gentle verses with crystalline daggers of electric guitar and lush harmony vocals. “Here Tonight” is all soul, with Pierce’s elastic bass playing off Richardson’s agile vocal. “On My Way” is laid-back and breezy, tailor-made for a day spent with sunshine and cerveza. “Said and Done,” which the band agrees is the album’s funkiest track, revels in the beauty of just letting shit go.

The album closes with a trio of emotional songs, beginning with the plaintive “One More Time.” Richardson wrote the song in the wake of a particularly difficult breakup and found personal catharsis in putting her heavy feelings to music. “Easy,” a Parsons composition, grapples with mental illness and suicide. And closer “Ozone,” which features a stellar musical outro, builds atop a years-old idea from Parsons and Richardson and ends Right On with a sense of hard-earned hope.

There’s something for everyone on Right On, whether it’s the swaggering rhythm of “Said and Done,” the painful honesty of “Easy” or, more likely, both. While only Banditos could make such an album, this music is for everyone. Richardson said it best: “Everyone can feel it.” 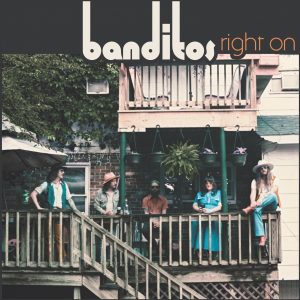 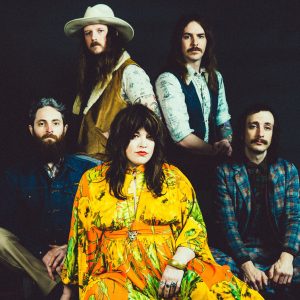 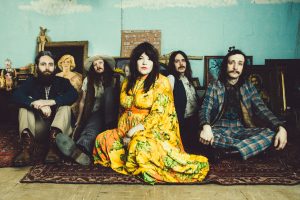 No Depression’s review of Right On

Right On review on Holler.

Glide’s review of Right On