Cultures express themselves in myriad ways. Tackling one as historically rich as Indian music might seem like a mammoth task, but it is an endeavor the Berklee Indian Ensemble has spent the past decade mastering – and they have amassed an audience of millions in the process.

Founded in 2011 by Annette Philip, the first Indian musician appointed as a faculty member at Berklee College of Music, the Berklee Indian Ensemble is a world renowned collective, known for its global Indian sound that honors traditions while boldly experimenting with a cross pollination of genres, cultures, and multidisciplinary art forms. A viral sensation with over 255 million views (accounting for 51% of Berklee’s total YouTube views), the Ensemble was in such high demand globally that it organically transitioned into a professional band in 2021, marking the Ensemble’s ten year anniversary. This pro entity is led by 11 full-time members representing India, Jordan, Israel, Nigeria, Indonesia, Norway, the USA, and other regions across the globe.

“The questions, ‘what if’, and ‘why not’ have been at the core of every chapter,” Philip shares. As true pioneers, the Ensemble is releasing their first collection of transnational, genre-bending music on their hotly-anticipated debut album, Shuruaat (Hindi for ‘beginning’).

In a world that is highly divided, Philip sees the band’s function as one of bridge-building; a free-wheeling approach to musical cultures that prioritizes the people who make them, rather than the restrictions of genre or form. “There is a unique power when musicians from different cultural and musical backgrounds make art together with vulnerability and openness in a space that celebrates their similarities and differences,” she ponders. “The music that gets created in this space comes across viscerally and allows a song in a foreign language to feel completely relatable because of the human connection, making you want to be part of it.”

As a result, 400 musicians from 52 nationalities have rotated through the Ensemble since its inception in 2011. And global audiences wanted in on it too.

The origins of their YouTube success can be traced back to their path-breaking 2014 interpretation of Grammy and Oscar-winning composer A.R. Rahman’s “Jiya Jale”, from the 1998 film Dil Se. The Ensemble’s version became a viral hit on YouTube, clocking up over 50 million views to date. It heralded a sold-out concert of new arrangements of Rahman’s music, featuring 109 Berklee musicians onstage at Boston Symphony Hall, and a record breaking 66,000 online viewers. This paved the way for the Ensemble to work with some of the biggest names in South Asian music, as well as headline international tours in Canada and India.

“Our audience has been begging for our music to be available on streaming platforms for a decade. It is fitting that Shuruaat features our most popular live performances as well as four originals, showcasing our journey so far, and the one we’re about to begin,” Philip explains.

The 10-track album features legendary collaborators such as Grammy-winning tabla maestro Zakir Hussain, virtuosic singers Shankar Mahadevan and Vijay Prakash, and Bollywood superstar Shreya Ghoshal. Ghoshal’s turn on “Sundari Pennae” was a highlight for the Ensemble and was developed through improvised rehearsal sessions.

“Konnakol meets prog rock; that is what we proposed to Shreya! She was so willing to let us deconstruct and experiment!” Philip exclaims. The result is a grunge-inspired take on this Tamil film favorite foregrounding Ghoshal’s crystalline vocal. “It was transformative, with Shreya’s soaring improvisation, over intricate Indian classical rhythms!”

Other standouts on the album include original track “Jaago Piya”, written by the Ensemble’s first Bangladeshi member Armeen Musa. The ballad’s warm cluster of vocal harmonies showcases the Ensemble’s obsession with lush choral arrangements. “Unnai Kaanadhu Naan” is one of the Ensemble’s most popular live videos to date, producing over 5 million YouTube views for its rearrangement of Shankar-Ehsaan-Loy’s original composition, and features an emotive swell of back-and-forth interplay between violinist, Layth Sidiq of Jordanian and Iraqi heritage and buzouki player, Yoel Genin from Israel.

“We’re always thinking about the ‘why’ of the song. What purpose does it serve?” Ensemble vocalist and percussionist Rohith Jayaraman muses. Those questions also turn inward.

“Through the Ensemble, I felt more connected to my own roots,” reflects keyboardist, Shai Portugaly. “I could relate to the vocal nuances in Indian music from the perspective of the Middle East, which I had never really felt connected to, even though I am from Israel. I really love this music, and the Ensemble is a huge part of who I am today.”

And this, perhaps, is what makes the intent behind Shuruaat so relevant today. The ten chosen tracks feature 98 musicians from all over the world, of all different ages and beliefs, coming together to co-create.

“It’s been an adventure; these last ten years. Experimenting, making music, building bridges, and dreaming super big. That’s really what this Ensemble was founded on,” Philip declares. “And ultimately, we make intentional art. Works to help us and our audiences think and feel inspired.”

With a decade spent honing their musical skills and developing these intuitive intentions, it is clear that the Berklee Indian Ensemble has only just begun. There will be millions more audience members to uplift with this culture of their own making. 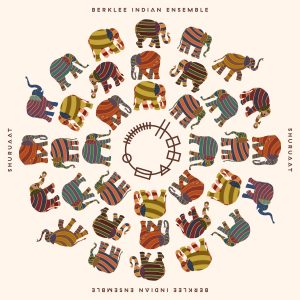 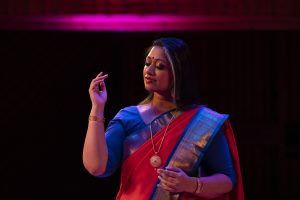 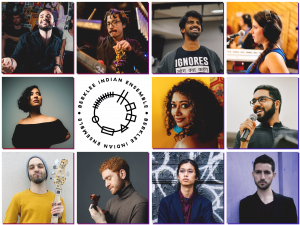 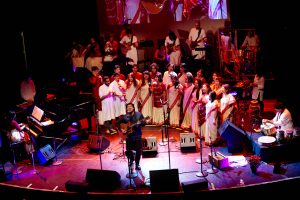 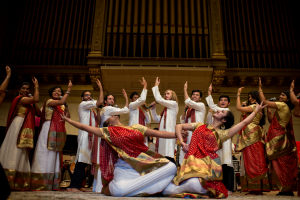 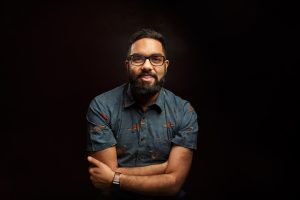