It seems counterintuitive, but for centuries, humans have sworn that it works: When a forest is struggling, sucked dry of its nutrients and at risk of catching fire and endangering everyone in its midst, the best thing to do is to take the situation into our own hands and start the blaze ourselves. Environmental scientists call it a controlled burn — a known method for harnessing wildfire and preventing widespread destruction. But oh, to be the person holding that match, lighting that first spark, watching the countryside go up in flames.

“I felt like I killed somebody. I can’t imagine any more guilt than what I felt,” says Dave Simonett.

Simonett didn’t start a literal forest fire, but he’s reflecting on another kind of controlled burn: The dissolution of his marriage and the splintering of his family. It’s a decision that’s been unfolding for the last year and a half of his life, and it’s a life-altering moment he’s documented in vivid detail on his fiery new album with Dead Man Winter, Furnace.

“The hardest part for me wasn’t necessarily the ending of a relationship, which was sad in its own right; it ended because it was over. But it was dealing with explaining it to my kids, and moving out of my house. It ended up being a lot harder than I thought it was going to be,” he says.

Furnace marks a whole lot of firsts for the accomplished songwriter. It’s his first time putting his long-running, popular string band, Trampled by Turtles, on hiatus to focus all of his efforts on a more personal project. It’s his first time speaking so plainly and literally about something happening in his private life. And it’s his first time dedicating an entire record to a single topic — a topic so significant and intimate that he questioned whether or not he should even release it into the world.

“I’m not even that big of a fan of breakup records, myself,” he says. “I mean, there’s some I really love. Like Blood on the Tracks, fuck, I love it. But it was just kind of a necessary — that’s the only way I know how to let it out. It would have been pretty hard to write about anything else at the time.”

The writing of Furnace came at the end of a 10-year marriage, a romantic relationship that started when he was only 19 years old, and a break from a band he’s been relentlessly writing for and touring with for the past 14 years. When the album opens, flames are flickering all around. “It starts right before the end of a relationship, going through that. And then it just gets worse,” he says, laughing at the sheer agony of it all.

There is palpable sadness and moments of poignant reflection, to be sure, but Furnace also propels Simonett forward with an undeniable sense of newfound freedom. At some points, like on the upbeat third track, “Red Wing Blue Wing,” you could describe the music as downright rollicking.

“I left it that way, because it’s the idea that you’re publicly trying to make everything seem like it’s all good — if someone asked how I was doing or whatever, I was like, ‘great.’ Even though I was fucking terrible,” he says, reflecting on the contrast between the heavy weight of the lyrics and the album’s occasionally lighthearted mood. “So it’s a little bit of that — the superficial side of it, your public side, or just even your side with friends, when you don’t want to talk about it.”

But talk about it he does, at times in harrowing turns of phrase that find him confronting his deepest and most hidden-away feelings about his divorce — from relief to disappointment, guilt, loss, bewilderment — and even wondering, in the album’s most heart-catching moments, if it’s a pain he’ll be able to survive.

I’m a destroyer, I’m burning in the starlight / All I wanted was to die, but you would not let me go (Dead Man Winter, “Destroyer”)

Like many of his contemporary songwriting peers, Simonett turned to his art to process the feelings that were swirling inside of him. “Right when we split up I went on this huge creative tear, and wrote a bunch,” he remembers. “And then as everything kind of settled in and the process started moving, life got really complicated, and it shut down for a long time. So I did something I’ve never done before: I went on a writing retreat. In the middle of winter, last winter, I went to this cabin in Finland, Minnesota, just like me in this little cabin for the week, with snow up to the windows and 20 below the whole time, and just wrote. And when I got to that place, I couldn’t stop it.”

“The weird thing is, I’ve never been a guilty person. I’ve done some sinning, you know, and I’ve never felt that bad about it. But I think it was just kind of bottled up, and it came out like a motherfucker when this happened. So I started feeling guilty about shit that I did when I was in high school, you know what I mean? It was just like this valve. And I’ve never really been through a wave like that before,” he says.

Ultimately, Simonett found the relief he was hoping for when it came time to make the record. Unsatisfied with the piecemeal approach that he used to cobble together the first draft of the album, Simonett rounded up his longtime friends from the Minneapolis roots rock scene — drummer JT Bates, guitarist Erik Koskinen, bassist Tim Saxhaug (also of Trampled by Turtles), and pianist Bryan Nichols — to record the album live to tape. The five of them holed up in the historic Pachyderm Studio in Cannon Falls, Minn., a ski chalet-like studio nestled deep in the woods where legendary albums like Nirvana’s In Utero were recorded.

With the chaos and disorder swirling around him in his day-to-day life, Simonett relished the chance to find respite in his songs at Pachyderm. The recording session ended up being a major turning point in both his personal and professional life: It provided a deep catharsis, allowing him to move beyond his guilt and grief, while being surrounded by his closest musician-friends gave him a much-needed light at the end of the tunnel and helped elevate Dead Man Winter to new heights as a live band.

“Making the album was this one great week — we just shut ourselves off in Pachyderm. We lived down there for the time. I don’t think I checked my email for like five days, it was awesome,” he says. “The vibe was just to make it feel like we’re playing in a room together. That can be a really joyful way to record. And then I had to go back to my lawyer’s office, you know? So I really treasure that.”

By the end of Furnace’s 10 tracks, one gets the sense that Simonett has found some peace; things may not be perfect, but he’s come to terms with his decision and is looking forward to brighter days ahead. For a stoic guy raised in Mankato and musically reared on the shore of Lake Superior in Duluth, sometimes the most significant thing you can say is also the most understated. As he sings on the album’s closing song: I am not ok / What else can I say? (Dead Man Winter, “You Are Out of Control”)

Dead Man Winter Is Back With Furnace on January 27 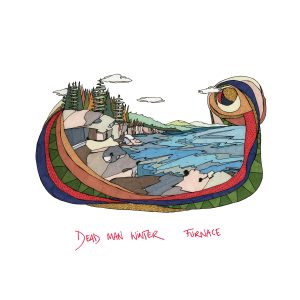 Relix “This House Is On Fire” Premiere