“When I write, it’s like I step inside of a dream,” says Laney Jones. “I go to this place that’s somewhere between sleeping and waking, between memory and imagination. It’s a place where anything can happen.”

Press play on Jones’ mesmerizing new album, Stories Up High, and you’ll find yourself transported there, too. Recorded at East Nashville’s famed Bomb Shelter studio with producer Andrija Tokic (Alabama Shakes, Langhorne Slim), the collection is lush and immersive, with rich, elegant arrangements that ebb and flow beneath Jones’ velveteen vocals. The performances here are graceful and timeless, evoking a faded, old Hollywood glamour full of longing and melancholy, but dig a bit beneath the surface and you’ll find that Jones is actually an optimist at heart, a believer in the relentless beauty of this mixed-up world. She wrote the album in what she describes as a “flow state,” surrendering herself to the creative process the way a monk might approach meditation, and the result is a captivating, cinematic work that’s equal parts stream-of-consciousness and careful introspection, an honest, intuitive record that hints at everything from Angel Olsen and Judy Garland to Brandi Carlile and Andy Shauf as it reckons with growth, change, and the very fabric of life itself.

“Strange as it sounds, I found myself sitting there crying while I was writing some of these songs because they came with such deep realizations about myself,” Jones confesses. “The music was there for me when I needed it most.”

It’s a recurring theme in her life. Born in Maryland and raised in Florida, Jones spent much of her youth surrounded by animals thanks to her parents, who raised kangaroos, wallabies, and other exotic creatures on their 10-acre farm. Though none of her immediate family members considered themselves particularly artistic, Jones fell in love with the theater in middle school and spent much of her adolescence performing in plays and musicals. In the classroom, she was a conscientious student with a sterling record, but by the time she reached college, academic and emotional burnout had begun to take hold, and Jones soon found herself turning to songwriting in search of release.

“At first, it was just a way for me to make sense of everything I was going through,” she explains, “but as time went on, it also became this way for me to get out of my shell. It helped me meet people and find a sense of community that I really needed.”

After studying abroad in China during her junior year, Jones decided it was time for a complete 180, abandoning her pursuit of a business degree and instead applying to the Berklee College of Music, where was granted a scholarship to study songwriting.

“I just got addicted to it,” she reflects. “Making music felt like something I had to be doing, and there was nothing else that could fill that void for me.”

Jones earned widespread acclaim with a string of early releases, drawing comparisons to the likes of Fleet Foxes and Bon Iver for her majestic take on organic roots music. Her 2013 debut, Golden Road, landed her a nationally televised performance at The Kennedy Center alongside Alison Krauss, Sara Bareilles, and Ben Folds, while her 2016 follow-up, Laney Jones, prompted Rolling Stone to hail her as an Artist You Need To Know and praise her “penetrating hooks” and “Seventies-era flourishes.” Tracks from the albums, meanwhile, racked up millions of streams on Spotify and turned up in films from major studios like Disney and Pixar alongside commercials for Google, Netflix, New Balance, Toyota, and Red Bull.

“I’m really proud of those first couple records,” Jones explains, “but they were the result of going into the studio for a week or so and coming out with a finished product. They were these little snapshots of wherever I happened to be at the moment. This time around, though, I wanted to give myself the time and the space to go beyond that, to work without any kind of limitations.”

So Jones let Stories Up High unfold at its own pace, capturing the record over the course of several years and multiple recording sessions. The new songs she found herself writing bore less of the rustic, folk-inspired imprint of her previous work and instead drew on a hazy, more abstract palette of airy indie rock textures reminiscent of Big Thief or Sharon Van Etten. Leaning into all the radical change going on her personal life (most notably her engagement and marriage to drummer Brian Dowd), Jones embraced the new, more self-assured versions of herself that emerged each time she shed her skin and allowed them to guide her on her creative path.

“When you’re younger, it’s easy to get caught up in worrying what other people will think of you,” she reflects. “Now I feel like I’ve been able to let go of a lot of that and learn to trust in myself and my instincts.”

That confidence is clear as day on Stories Up High, which opens with the theatrical flourish of the entrancing title track. “I fell from stories up high / I died a little inside,” Jones sings with a visceral vulnerability. “But if I had a crystal ball / I never would have lived at all.” Like much of the album, the song contemplates death not so much as something to fear, but as something to remind us of the fleeting and fragile nature of being alive. The spacious “Long Way” makes peace with the inevitable, while the bittersweet “Daniel” navigates growing up in the shadow of loss, and the slow-burning “Remember” finds that it’s our mortality that ultimately makes our time together so precious.

“I think that in order to live life to the fullest, you have to remember that it’s going to end someday,” Jones says. “You have to be present because once the moment’s gone, it’s never coming back.”

Jones frequently finds liberation in such revelations, detaching herself from desire and expectation and immersing herself fully in the present, even when it’s painful. The tender “If Life Is” learns to be grateful with what’s right in front of us; the swirling “Empire State” locates the beauty in struggle; and the buoyant “Secret Weapon” finds strength in weakness. But perhaps it’s the anthemic “Not Alone” that sums things up best, as Jones sings, “All of my family / All of my history / And all of the friends I’ve known / All of the pets I’ve owned / All of the books I’ve read / Music that fills my head / I carry them with me wherever I go / I’m not alone.”

“To me, that’s what art does,” says Jones. “It reminds you that you’re human, that we’re all going through this together, that you’re never really on your own because you carry everything and everyone you ever loved inside of you.”

In the end, Laney Jones isn’t just stepping into a dream when she writes; she’s making room for all of us to join her there, too.

Laney Jones Returns With Long-Awaited New Album Stories Up High, Out on May 20, Shares Single and Animated Video 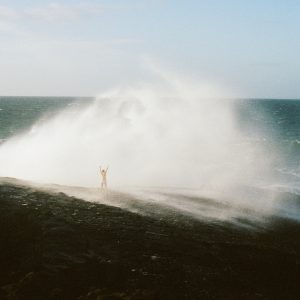 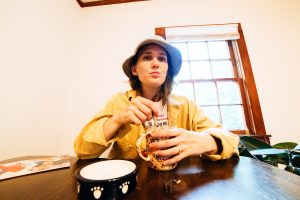 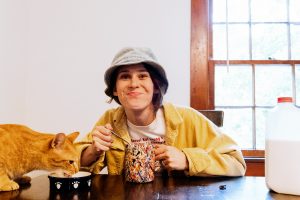 Under the Radar Magazine premiere