Lera Lynn
On My Own

Somewhere along the way, most of us started listening to everybody else a little too much. Not Lera Lynn. “I kept trying to work with different people, trying to find someone else to help me define my identity,” she says. “Ultimately, everything is wrong if you don’t have the clear vision yourself.”

With her new album On My Own, Lynn has emerged not only with a clear vision of herself, but with an entirely self-propelled breakthrough: Lynn wrote, sang, produced and recorded On My Own alone. She also played every single instrument on the record. It is a magnificent album, haunting and wild. It is also a record that no one else could make, because no one else is Lera Lynn. “I think there is something special about a singular vision,” Lynn says. “That’s not to say there’s not something special about a shared vision, a collaborative vision. But I would be so thrilled to hear records made in isolation by my favorite artists, just to know what their uninfluenced vision of their music is.” She pauses, then adds, “I guess I just wanted to hear what my own imagination sounded like.”

On My Own is a triumphant exploration of mood and texture, because when Lynn felt exploratory, no one was there to stop her. With roots in experimental west coast folk, Lynn’s new songs link arms with indie rock giants like Cat Power, Sharon Van Etten and Jenny Lewis. Lynn rumbles and writhes through meditations on forgiveness, growth and the liberation that only comes with taking control of your own life. Her voice––a beloved instrument that’s earned praise over the years from The New York Times, Rolling Stone and more––still anchors it all, but is even stronger and bolder, unfettered by Lynn’s self-reliance.

Lynn also turned the limited resources of recording on her own in isolation into an advantage––a license to test and tease out the unexpected. Her years logged in studios come into play, too, helping to shape a record that sounds anything but amateur. On My Own celebrates all of her signature qualities, like reverb-drenched electric guitars and dark but hopeful songs. With her strongest compositions yet, Lynn puts on a songwriting clinic but does so in a subtle and earnest way, with production that does not cloud or veil the strength of the songs themselves. Reading the lyrics alone is moving, but when combined with her unique melodic sense and lush but minimalist production, you’re presented with a set of undeniably compelling and deeply personal pieces. Lynn lets the listener in like never before.

Over the last decade, Lynn has earned a loyal following, critical acclaim and the admiration of peers and heroes, the last of which propelled the brilliance of her last full-length release, 2018’s duets project Plays Well with Others. Several years earlier, the Nashville-based Lynn had turned heads in LA and she began writing music for the second season of HBO’s True Detective, on which she also landed a recurring role. Versatile and smart, she has sometimes seemed too good at too much.

On My Own harnesses all of that energy into a single potent focus. Album opener “Are You Listening?” begins with palpable urgency, building anticipation for Lynn’s svelte voice. Lynn doesn’t disappoint: “As a child I would dream of the bottom of the sea / If I swam deep enough, there was air to breathe,” she sings, launching into a reconnection with childlike faith in possibility. “It’s taking control of your destiny and deciding how you’re going to interpret the things that are happening around you,” Lynn says.

Both ominous and accepting, “Dark Horse” pulses from quiet confession to urgent demand as Lynn’s grungy electric guitar takes over. “So Far” builds instrumentally and then pulls back as Lynn beautifully cries out a candid reckoning with herself. With another stark percussive opening that highlights Lynn’s self-contained approach to drums, “Things Change” moves through a reconciliation with the unavoidable shifts that make up a life.

Grace for others and honest looks at herself underpin many of the songs on On My Own. Lynn acknowledges the thread of forgiveness. “A few of the songs on this record are about my father, or inspired by him,” she says. “I’m the only child of an alcoholic. He died when I was in my early 20s. Like many children of alcoholics, I’ve repeated some unhealthy relationship patterns my entire life, up until a few years ago.” Lynn learned to let go of anger, realizing holding on was hurting only her.

“I think writing all of these songs, I was also working through a lot of different things, recognizing toxic patterns in my life,” says Lynn. “Learning to forgive and learning grace.”

Heartbreaking “Make You OK” aches with longing as Lynn wonders why she couldn’t fix people in her life ––a mistake she says she’s made, over and over again. Radiating humanity, “A Light Comes Through” imagines new conversations, filled with mutual understanding and peace. In the swaggering “Let Me Tell You Something,” a narrator encourages a kid to pursue a “simple life” and not aim too high or dream too big. “It’s actually a conversation that I had with my father and his advice to avoid anything creative as a career,” Lynn says. “I loved the idea of writing and releasing a song about someone telling me not to write and release songs.”

“Isolation” offers sharp modern commentary that’s also proven prescient during the reign of Covid-19: Technology has replaced touch, and in the midst of constant connection, we all feel so alone. Lynn points to the song as a favorite.

In an attempt to poke holes in our never-ending quest for more, “It Doesn’t Matter” wades through a lush soundscape Lynn created by layering her own dreamy harmonies. “This song is definitely a reflection on how much time we spend looking outward and how dissatisfied we end up as a result of that,” Lynn says. “And all the beautiful things that we could create and how much more love we could have for ourselves and for each other if we just stopped with all that.”

Album standout “What I’m Looking For” unfurls luxuriously at an easy lope, only to reveal the steady panic felt when a chance seems to be slipping away. Lynn wrote the song when suddenly, a dramatic left turn in her health raised hard questions. “It made me stop and say, ‘Wait, what am I doing?’,” Lynn remembers. “I love playing music and am really grateful I get to do it. But at that point, I was questioning what the purpose of it all was. And was I missing out on life-life? Chasing a dream that may never come true? Then this song came out.”

On My Own succeeds in feeling good about life without sanding over the rough spots and getting glossy and Lynn feels proud of what she’s made. “There is a moment that is palpable when you feel the vision becoming focused––really focused––in an artist’s career,” Lynn says. “You feel them realizing their potential, or at least, opening the door to it, without someone saying, ‘That’s too weird. Don’t do that.” She pauses, “I think it’s good for there to be a glimmer of hope––but I just want it to be a glimmer.”

Lera Lynn Releases “Let Me Tell You Something” Autobiographical Song and Bold Video; On My Own out October 23

Lera Lynn To Release Career-Defining Breakthrough Album On My Own October 23, 2020 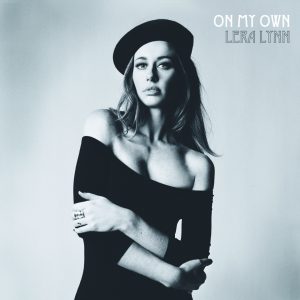 Show on the Road Podcast