Marc Cohn & Blind Boys of Alabama
Work To Do

Soul, gospel and pop merge effortlessly on Work to Do, a unique collection combining the vocal and songwriting talents of Marc Cohn and the sanctified genius of the veteran gospel stars Blind Boys of Alabama. The album will be released by BMG on August 9, 2019.

Produced by John Leventhal, the set includes three new studio collaborations by Cohn and the Blind Boys (two new original songs and a version of the gospel standard “Walk In Jerusalem”) and seven intimate performances captured at the Katharine Hepburn Cultural Arts Center in Old Saybrook, CT, for the PBS concert series The Kate.

The album – which follows on the heels of more than a year of live collaborative dates featuring the Blind Boys and Cohn – seamlessly melds the talents of these Grammy Award-winning musicians. Cohn established himself with the self-titled, platinum-selling 1991 album “Marc Cohn” that garnered him the coveted trophy as Best New Artist at the Grammys and solidified his place as one of this generation’s most compelling singer-songwriters. The Blind Boys – founding member Jimmy Carter, Eric “Ricky” McKinnie, Joey Williams, Ben Moore and Paul Beasley – have been honored with five Grammys and a Recording Academy Lifetime Achievement Award. (Leventhal is himself a five-time Grammy winner.)

Cohn says of his work with the venerated gospel group, “My collaboration with the Blind Boys of Alabama has been a thrilling chapter in my musical life. We’ve performed dozens of shows together and I was honored to co-write three songs for their previous album. Now, with the release of our new album, my early love and feeling for gospel music has come full circle. It was wonderful to both write new songs with their heavenly voices in mind, and to capture the joy that they bring to some of my older songs in a live setting.”

Group leader Carter repays the compliment: “Marc Cohn has been a great friend to me and to the Blind Boys of Alabama. Marc is a very fine gentleman, and I’m looking forward to doing more with him as soon as we can.”

The germ of Cohn’s work with the Blind Boys was his songwriting work with Leventhal on soul giant William Bell’s Stax album This Is Where I Live, the recipient of the 2017 Grammy for best Americana album. As it happened, Bell shared management with the gospel stars.

“Their manager sent John and me these video interviews of Jimmy Carter and [co-founder] Clarence Fountain talking about their lives,” Cohn recalls. “The concept for their next record was to write songs culled from those interviews, giving the Blind Boys the opportunity to sing songs about their own lives…their own struggles. As a lyricist, what I had to do was almost journalistic – I took a lot of notes while listening to those interviews and my job was simply to find the poetry in what they were saying. Their stories are incredibly moving, so the songs came easily.”

The resulting album, 2017’s Almost Home, contained the Grammy-nominated Cohn-Leventhal composition “Let My Mother Live.” The experience inspired a lengthy run of collaborative 2018 shows featuring Cohn and the Blind Boys. During a date at New York’s City Winery that February, Cohn was made an honorary member of the group. (Recalling the date, he exclaims, “That was a big day!”).  A surprise appearance by Clarence Fountain at a Cohn/Blind Boys concert last summer proved to be the gospel titan’s last performance before his death last June at the age of 88.

Originally, plans called for making a Cohn-Blind Boys EP that would contain two fresh compositions, Cohn and Leventhal’s “Talk Back Mic” and Cohn’s “Work to Do,” and a new rendition of the Golden Gate Quartet classic “Walk In Jerusalem” (a live staple of the Blind Boys’ repertoire early in their career). However, the musicians’ rousing appearance before the enthusiastic Live at The Kate audience sparked the decision to incorporate material from the televised performance (which ultimately aired on PBS outlets in May) into a full-length album.

The songs from the TV show find the Blind Boys adding soulful new vocal textures to half a dozen numbers drawn from the breadth of Cohn’s distinguished career: the mega-hit “Walking in Memphis,” “Ghost Train” and “Silver Thunderbird” (from Marc Cohn, 1991); “Baby King” (from The Rainy Season, 1993); “One Safe Place” (from Marc Cohn Live, 2005); and “Listening to Levon” (from Join the Parade, 2007).

Cohn says of the new arrangements, “I was greatly influenced by those early Paul Simon records that featured the Dixie Hummingbirds. Songs like ‘Take Me To the Mardi Gras,’ ‘Tenderness’ and ‘Loves Me Like A Rock’ are still among my favorite recordings of all time. So even though it’s not the first time the singer-songwriter sensibility has been lifted by and merged with the beauty of a legendary gospel group, it’s been wonderful to put my spin on a sound I’ve loved since I was a kid…and to explore that sound with the Blind Boys, both on stage and in the studio, has truly been a gift.”

The Blind Boys received their own spotlight at The Kate with an electrifying version of “Amazing Grace.” Their striking rearrangement of the hymn – now sung to the tune of the folk classic “House of the Rising Sun” – was brought to the group by John Chelew, producer of their 2001 crossover hit album Spirit of the Century.

Carter recalls, “When he brought that arrangement to us, we rejected it – we didn’t want it! We thought it was almost sacrilegious. But he said, ‘Do this for me – let’s record it, and if you don’t like it, we won’t use it.’ But we liked it, and that was the song that helped bring the Blind Boys their first Grammy.”

The Blind Boys are exacting about their repertoire, Cohn notes: “They won’t sing many songs in the popular music canon. They’re not comfortable singing straight up love songs. There has to be some sort of spiritual element to a song for them to feel good about singing it. Luckily, I’ve written a handful of songs that fit the bill for them. It’s been an honor listening to them and singing with them every night. I’ve never been as happy on stage as I am when I’m singing with these great gentlemen of gospel.” 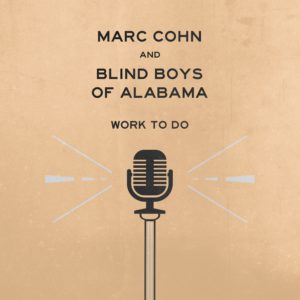 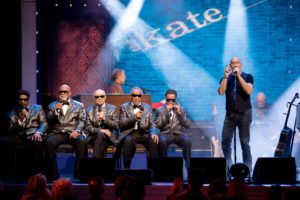 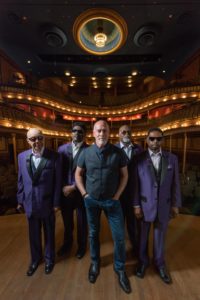 Billboard “Work To Do” Track Premiere