At first, Seth James’ story reads like plot lines have gotten their wires crossed or translations muddled: Could a working cowboy from deep West Texas really be a rock-and-soul roots funk master, educated by the blues?

One listen to James’ new album Different Hat proves the answer is implicitly––resoundingly––yes.

“A lot of those songs sounded like they were from people who worked hard,” says James of the blues he found as a kid in the middle of the Texas plains. “I was just a long way from anything. But the language was simple and romantic in a way that I could understand.”

Music––especially the blues––has a history of jumping through generations, continents, and races thanks in large part to old roots that are gnarled, broad, and strong enough to bust through crowded city sidewalks––and lonely mesquite-pricked pastures. Working cattle on his family’s ranch in King County, James wasn’t inundated with pop culture like other 90s teenagers. He was isolated, and if he wanted music, he’d have to dig. “There’s not a radio on a horse,” James says with a soft laugh. “I was musical, but music didn’t seem like it was everywhere. I was always hunting for it.”

James found Muddy Waters and Lightnin’ Hopkins––then Booker T. & the MGs, NRBQ, Delbert McClinton, and ultimately, a sound entirely his own. A couple of decades ago, he emerged with an easy voice that can croon and soul-shout, campfire storytelling chops, and moody, virtuosic electric guitar playing capable of blistering rides, New Orleans drama, and roadhouse funk. His new album, Different Hat, puts all of that and more on confident display. Produced by Kevin McKendree, the record runs wry country folk, organ-soused trios, and more Americana riches through an unapologetically blues filter. Recorded live with ace players, Different Hat also firmly cements James’ place as a preeminent torch bearer, still influenced by what shaped him as a kid. “There was nobody there to stifle me or tell me not to listen to this or that,” James remembers. “It was always just about the way it made me feel.”

A large grassroots following has been hip to James for years. His 2009 solo record That Kind of Man brought next-level acclaim. The next year, James co-founded roots rock group The Departed with friend Cody Canada. Three years and two albums later, James returned to his solo career, simply because he missed playing his own sound he’d worked so hard to find. The miles logged and music played have led James to an important place. “If you just sit and talk to some old cowboy in West Texas, he doesn’t change the way he talks from conversation to conversation,” James says. “It’s the same way with music.” James is who he is––no matter who else is around.

That self-assurance shapes Different Hat. Opening track “Mamarita” saunters with boozy Big Easy energy. Written by Al Anderson, Pat McLaughlin and Shawn Camp the song is a buoyant welcome to the album that also sharpens our collective longing to hear music, live. James points excitedly to the track’s players. “You can take a song like that and just almost have it right––and it’s terrible,” he says. “It’s really important that the musicians understand the intricacies of that kind of music. There is a lot of stuff happening.”

Every one of the album’s covers reveals more of James’ quiet prowess as an interpreter. His “Ohoopee River Bottomland” “Ohoopee River Bottom Land” slinks all the way to country funk perfection, while his version of JJ Cale’s “Raising Cain”––a song that’s never been cut by anyone else, including Cale––features Lee Roy Parnell on slide guitar, as well as horns and plenty of swing. James recorded a second Cale song for the album: “Wish I Had Not Said,” enriched by sublime vocals from Jessica Murray––James’ wife––and a sultry groove that nods to Memphis and Muscle Shoals.

James has studied Delbert McClinton for years––and it shows. When McClinton, with whom James has also toured, suggested James cut his song, “Solid Gold Plated Fool,” James didn’t hesitate. “It’s been an anthem for me most of my life,” James says of the song. “I don’t run around seeking approval because I’ve learned that’s scary and just not a healthy thing to do, but when you get that kind of nod from him, it does mean a lot.”

Listeners won’t hear James’ signature guitar on the powerful closing track “Real Bad Deal”––only his smooth vocals, backed by sparse drums and keys. It is the first time James has ever not played guitar on one of his recordings. “Sometimes it’s all about space,” James says. “The space is huge, and it can be scary, especially if you’re a guitar player. If the song requires you to have a bombastic moment of, ‘Hey, I play guitar and you better look out,’ then that’s great. But if the space is more beneficial for the song, the space wins. This song is a prime example of that.”

“Gettin’ It On” takes a bad divorce and makes it funky, while “He Don’t Love You” channels Motown swagger. With crisp high-hat taps and a chorus of keys and horns, “Pleasing Linda Lou” is James’ addition to Fort Worth blues folklore, while “Burn It Down” takes a joy ride through a hard-driving beat with growling guitar.

Two standout tracks are intricate story songs penned by James. With horns and keys leading the supporting cast, “Big Trouble” is a mostly true tribute to an underground Texas guitar great. “Moonpies” is a stunning vocal showcase packed with clever lines and vivid pictures. James planned to finish the song with McClinton, and the two texted back and forth about it. “Finally, Delbert said, ‘You know, I think it’s done––I might change this one little line here,’” James remembers. “So when it came time to put the record out, I reached out to him about his publishing information, and he said, ‘You’re out of your mind.’ So, according to Delbert, I wrote the song by myself.” James laughs, then adds, “It’s a fun song––and pretty bizarre, musically. It’s kind of half Howlin’ Wolf, half Burt Bacharach.”

In the trippy and forlorn “World Full of Strangers,” James tackles the isolation of the last year. Instead of burrowing into quarantine blues or pandemic fear, the song looks outside to acknowledge the shared experience of trying to find familiarity again. “You can see somebody that you know very well, but you haven’t seen them in nine months and all of a sudden, they feel like strangers,” James says. “It’s just felt like everybody got put in the corner. To me, that’s the most dangerous thing to come out of all this.”

James has spent his life discovering and proving what music can do, not just artistically, but when it comes to something as ordinary and universal as Saturday night. “I don’t want to do a good job so that I can be successful and sell more records,” James says. “Don’t get me wrong––that would be great, too. But that moment where everyone is together, their glasses cheers-ing while they shake off the blues a little bit––I want to be part of that.” 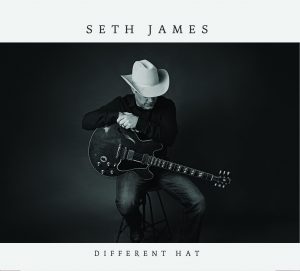 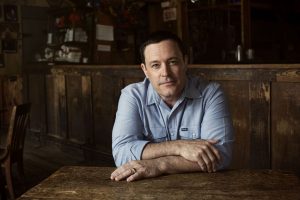 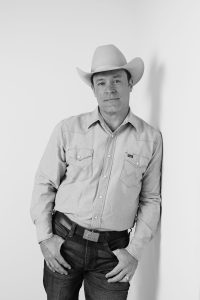 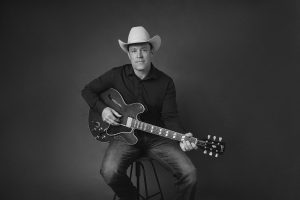 Blues Scene “She Likes To Run” Premiere and Q&A