Shawn James
The Dark & The Light

Shawn James’ voice is a force of nature, a musical preacher to a flock that accepts everyone, a combination of the gospel choirs he sang with as a youngster and his training in classical music and opera. Born and raised on the South Side of Chicago, James’ timeless sound is steeped in blues legends like Robert Johnson and Son House, forever at the crossroads of damnation and redemption, the two inextricably woven into the fabric of his songs.

The Dark & the Light, his first album for L.A.-based indie label Parts + Labor Records, marks a creative leap forward for the 32-year-old troubadour. James annually tours more than 150 dates around the world and has released some 70 songs over the past five years, both on his own and as part of his “more raucous, rock” band the Shapeshifters, a loose group of musicians formed in Fayetteville, AR, which served as his temporary home before a recent move to the west coast.

Transcending any and all genres, James’ songs speak as much to these tremulous times as they do the eternal human condition. Steeped in mythology (the fearsome a cappella which opens “Orpheus”) and America’s dark past (the deep delta blues of “Burn the Witch”), The Dark & the Light seeks to turn despair into hope – as he does on the two-part tribute to his steel-worker father on “Love Will Find a Way I” and “Love Will Find a Way II.” Shawn’s father died an alcoholic when he was five and the two songs feature a journey from the depths of despair to the ecstatic heights. Shawn sings, “The blood that filled his veins flows through mine/It’s not that I’m ashamed but how can I redefine how your story ends.”

“The record’s about turning the darkness and pain I’ve experienced in my life into songs that can inspire others to make the best of hard times,” he says.

Recorded at his new label’s Venice Beach, CA, recording studio with producer Jimmy Messer (AWOLNation, Kelly Clarkson, Kygo, The White Buffalo), the songs for the new album were written by James while back in Chicago.

“I’ve discovered how to get to the point quicker, to do more with less,” explains James about how his songwriting has evolved. “I’m confident enough now to make my music more accessible without losing its integrity and honesty.”

Songs like the Memphis soul of “There It Is,” which vows to counteract bad deeds with good work and the deep blues of “Haunted,” about moving on despite the injustice around us, both tackle the current volatile cultural climate without mentioning names or taking sides.

“For a long time, I wouldn’t mix music and politics, but I reached the point where I realized I shouldn’t be ashamed for speaking up,” Shawn says. “All the craziness is what inspired me to speak up, to try to live an honorable life in spite of it.”

In “The Weak End” and “The Curse of the Fold,” James urges us to embrace our vulnerability in the midst of those who would take advantage, urging us never to give up, to keep going, and not just turn our cards over.

“Without music, I honestly don’t know where I would be right now,” admits Shawn. “I was lucky I had something to bleed into, to cope with the struggles of my everyday life.”

During his youth, Shawn was introduced to the Pentecostal church in Chicago. While he no longer is affiliated with any religion, that experience allowed him to sharpen his vocal talents while he sang with the church choir. Naturally gifted, Shawn entered a number of vocal competitions, with a multi-octave range that makes him unique as an artist. He didn’t start playing acoustic guitar until high school and didn’t start writing songs seriously until he was in his mid-twenties. Studying classical music helped him hone his vocal technique, but he learned to let loose emotionally in church. “I had the mix of both worlds,” he says.

Much of those ministers’ fiery rhetoric resonated with James, whose music offers a congregation with no borders or boundaries. “I’ve found that my songs with the biggest impact are the ones that inspire people, and try to lift them up,” he says. “Fans tell me how these songs saved their lives. Is there any greater accomplishment than that? I fully embraced that on this album. These days, people need encouragement, and I just wanted to contribute.”

The new album is James’ fourth solo effort, following his 2012 debut, Shadows, 2014’s Deliverance and 2016’s On the Shoulders of Giants, in addition to a live release (Live at the Heartbreak House) and a two-song covers EP recorded while on tour in Madrid (including set staples “That’s Life” and “Ain’t No Sunshine”). His songs have been featured on HBO, CBS and Sony Playstation’s The Last of Us 2 videogame, with the track, “Through the Valley,” topping Spotify’s Global Viral Charts, while generating more than 60 million streams combined on Spotify, Apple Music and YouTube. More recently, he recorded a soulful take on Macy Gray’s Grammy-winning “I Try” for Grammy.com’s “Grammy Reimagined” series.

Shawn maintains a busy slate of performances in the U.S. and abroad. “I love touring because I want to earn what I get, work for it every day,” says Shawn, admitting that’s the hard-hat blue-collar attitude he inherited from his biological dad. “I enjoy the struggle because that’s what makes it all worthwhile.

“I enjoy meeting and talking to new people. I don’t hide in the green room before and after the show. I’m out there shaking hands, pressing the flesh, and hearing their stories. That’s the reason we do this.”

Pointing to “authentic” performers like Tom Waits (“He has an impeccable ‘no bullshit’ compass”), soul singers like Otis Redding, Sam Cooke or Bill Withers, and the old blues icons who inspired him, James explains, “They weren’t precious about what they did; they didn’t put themselves on a pedestal. I want my music to be respected, but I’ll still sit down at the bar to have a beer with you. My goal is to make music that stands the test of time.”

With The Dark & the Light, Shawn James has done just that. He has flipped the script, moving from darkness to light on the strength of song. 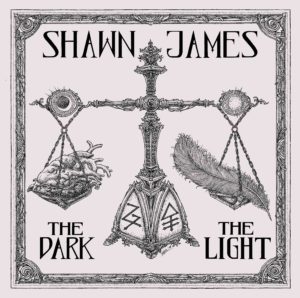 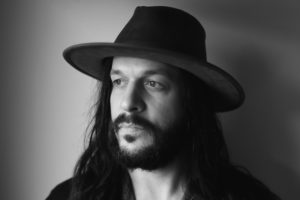 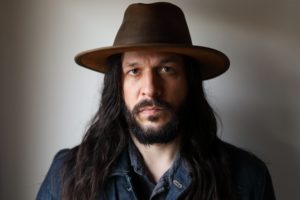