Rejecting the influence of fleeting scenes and encroaching developers; the Laurelthirst Public House has always stayed in tune with its generations of muddy patrons carving out lives as blue-collar artists. “The Thirst”–Portland, Oregon’s oldest independent venue–has always been a sort of misfit stronghold–a sanctuary for the same kind of spirit that sustained local punk legends Dead Moon and outsider folk hero Michael Hurley.

It’s also become a lifeblood for working-class musicians like Taylor Kingman. Most nights, you’ll likely find the TK & The Holy Know-Nothings songwriter and lead vocalist on stage (or at the bar). Ask around the place and you’ll quickly uncover Kingman’s reputation as the sort of songwriter who makes other songwriters jealous, even angry. You’ll also hear about his hustle as both a player and writer, as those same songwriters line up to play with him. It’s led to countless projects, exploring myriad concepts and styles, and making the sort of honest music that stands starkly, alongside the Laurelthirst, against the backdrop of a city quickly fading under the lacquer of gentrification.

TK & The Holy Know-Nothings is perhaps Kingman’s most beloved project. Half-dutifully and half-facetiously self-dubbed “psychedelic doom boogie,” the group was born out of Kingman’s desire to create a loose, groove-heavy bar band that never sacrifices the importance of good, honest songwriting. Doing so required pulling together a local supergroup of friends, neighbors, and fellow Laurelthirst royalty, including drummer Tyler Thompson and multi-instrumentalists Jay Cobb Anderson (lead guitar, harmonica), Lewi Longmire (bass, guitar, pedal steel, flugelhorn, mellotron, lap steel) and Sydney Nash (keys, bass, slide guitar, cornet). It’s a band of deeply contrasting styles buoyed by a sincere and palpable mutual trust–one that allows them to find and lose the groove with the same ease. They build graceful, spaced-out landscapes around Kingman’s storytelling–his voice ragged and broken one moment and raging the next–only to deconstruct them through a fit of manic and often dissonant rabbit holes. And Kingman’s equally irreverent, delicate, and cerebral first-person narratives somehow merge seamlessly with it all.

The Incredible Heat Machine, the band’s forthcoming album, is an album of growth. It doesn’t diverge all that much from 2019’s Arguably OK (and 2020’s B-sides EP Pickled Heat). Its story is simply that of a working band coming off the road and going right back to work, intent on capturing the growth and wear amassed in the meantime. Both albums were recorded in just a few mid-winter days (two years apart) in Enterprise, Oregon, a quiet cowboy town at the foot of the snow-capped Wallowa Mountains. They were both made live, with no overdubs, on stage at the historic OK Theatre, where much of their budget was again spent on keeping the heat on. And again, Thompson engineered on the fly with the help of old buddy and local theater resident Bart Budwig. While Arguably OK introduced listeners to the band’s distinct brand of unbound rock & roll infused with the strange, wide-open, outsider nature of Western country; The Incredible Heat Machine just goes stranger, wider, and further out. Lyrically, Kingman delves deeper into the struggles of the working-class musician with themes of substance abuse and redemption, companionship as salvation, and the ever-present shadow of disillusionment. His lyrics are again intensely honest, full of all the lessons learned and ignored, while always tempered with mystery and room for the listener.

“I like to alternate between plain-spoken truth and fragmented visions of painfully vivid dreamscapes,” Kingman notes. “Songs need a listener to be complete. And I don’t want to tell the listener what to think or do. It’s our job to present honesty, good or bad: an unfinished song from an unfinished life. And everybody hearing it gets a co-write because each moment is unique.”

This is apparent from the start, as album opener “Frankenstein” comes to life with deceptive lyrical hooks, coupling the pieced-together aesthetic of the famous resurrected corpse with generous metaphorical roundabouts. Its psychedelic wormholes envelop the song in warm, trippy veils, transcending the confines of its Western country roots to an altogether more experimentally robust misfit anthem.

“Serenity Prayer” follows with the Sisyphean journey of a working musician who makes good for a few hours each evening playing at the local tavern before finding themselves inevitably drawn to a seat at the bar again. It’s an entreaty to oneself to find the strength to change tomorrow, as Kingman writes, “Grant me the serenity to pay for this in change,” and “Grant me the wisdom to know I owe the difference,” before always returning to, “But a friend behind the bar is a mighty fine deal.”

Kingman’s songwriting vacillates between the specter of longing and the levity of self-awareness. “The trick is to be honest,” Kingman says. “And there are many ways to be honest.” It comes in songs as crushing as “Hell of a Time” and “I Don’t Need Anybody”; in irreverent tracks like “I Lost My Beer”, a love letter to a misplaced libation that is already a favorite among Laurelthirst patrons; and in the rattling regret of hangover lament, “Bottom of the Bottle”. And then there’s the title track and its “Preprise”, a two-part roadhouse opus that splits The Incredible Heat Machine, comprising a formidable showcase of TK & The Holy Know-Nothings’ divergent styles, both sonically and lyrically. “I want a line to fill me with golden light and then leave me alone in the pale desert with just the wind and my heartbeat,” Kingman shares.

Finally, the album closer “Just the Right Amount” ties the album’s themes together as Kingman places himself on stage, staring at the mic and the crowd, reflecting on the experiences and decisions that led to these songs. “I think he liked the way it sounded / Drunk and bleeding on a borrowed mic / I’ve never seen a bar so crowded / Dead quiet on a Saturday night / Maybe one to get them crying / Maybe one to help them fight / You gotta do a little wrong, kid / To get that kind of right.”

“At our core, we are working musicians. And that’s why we will always be a bar band no matter where we play. We are players and that’s all we wanna do. We live for songs and we take them very seriously. Even the stupidest ones. It’s all sacred and that’s why it should be mangled by children.”

TK & The Holy Know-Nothings’ new album is above all things true to the moment it was created, full of lessons unheeded and questions unanswered. In the end, it will always exist in that moment and whatever moment it shares with its listeners. Kingman sums it up best: “The Incredible Heat Machine is a haunted jukebox on wheels and God’s own check engine light. It’s a locomotive composed of living parts linked by some buck-toothed telepathy allowing it to make it down the tracks where there is no final answer or destination, just movement and feeling.”

TK & The Holy Know-Nothings Release Sinister Video For “Hell of a Time” Off The Incredible Heat Machine Out October 15, AmericanaFest Showcase September 23 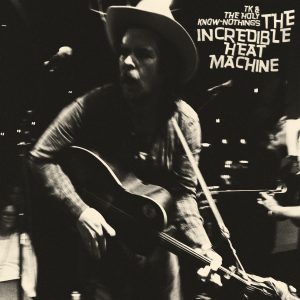 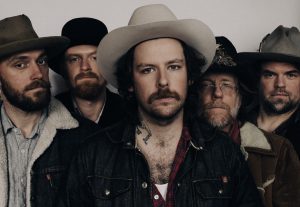 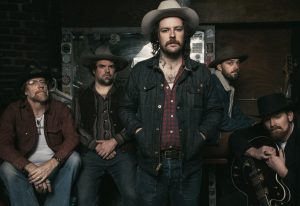