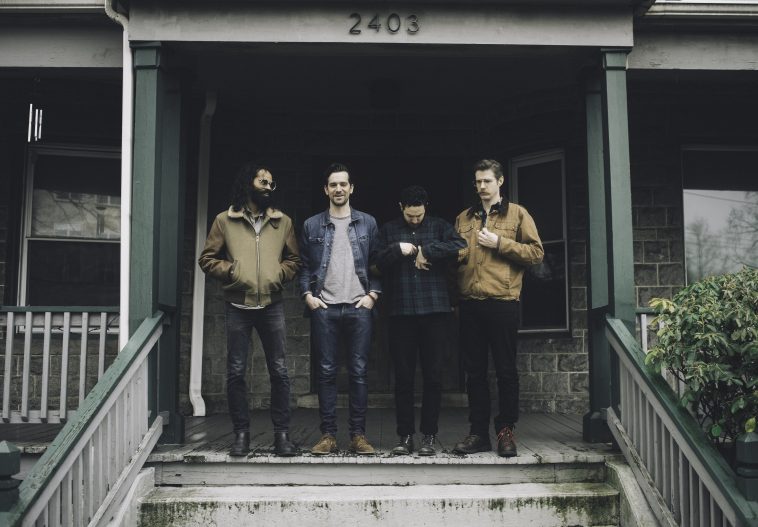 After completing the recording of their new release Fish Pond Fish virtually during Covid-19, celebrated indie-folk group Darlingside reconnects again onscreen for the “A Light On In The Dark” video. The band launches their “Distantly Social Sessions” to showcase the new Fish Pond Fish songs as a regular series while unable to share the music on tour. The lush harmonies and exquisite melodies which distinguish Darlingside make it difficult to believe the group is not together in one room. Watch “A Light On In The Dark” HERE. Fish Pond Fish is set for release on October 9, 2020. Pre-order HERE.

Fish Pond Fish is the follow-up to the band’s critically acclaimed 2018 release Extralife, which garnered praise from NPR Music, The Wall Street Journal and many more. On Fish Pond Fish, band members Dave Senft (vocals, bass), Don Mitchell (vocals, guitar, banjo), Auyon Mukharji (vocals, violin, mandolin), and Harris Paseltiner (vocals, cello, guitar) follow the collaborative process they have employed since forming in 2010. Group songwriting exercises led to lyrically-driven ideas, which grew into something far beyond what any one band member could foresee. Each bandmember was pushed to a new place in every level of songwriting.

The 2020 pandemic came just as Darlingside was finalizing lyrics for the last batch of songs, which forced them to cancel the final weeks of recording with producer Peter Katis (The National, Interpol). While quarantining separately, each member set up a home recording rig to capture sounds individually, while mixing, writing, and arrangement decisions were all carried out virtually. Forced to evolve, they leaned more heavily on individual experimentation and decision-making, both in recording and editing. Fish Pond Fish reflects that change, sonically dense yet individually marked, impossible to categorize by one texture.

Darlingside has long been praised for their harmonies and intelligent songwriting, described by NPR as “exquisitely-arranged, literary-minded, baroque folk-pop,” and which The New Yorker compared to David Crosby and The Byrds. Paired with their sharp wit and wordplay, Darlingside has become a live-performance favorite, and their songs are treasures for literary and lyric-loving fans. Fish Pond Fish expands on the band’s broad storytelling prowess, adding more layers and strokes onto an already dense palette.