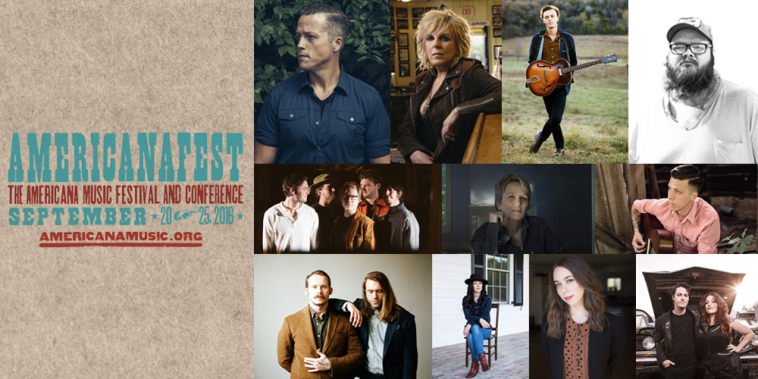 Artist of the Year, Album of the Year and Song of the Year (“24 Frames”) nominee Jason Isbell recently took home his first two Grammy awards for his acclaimed new album Something More Than Free, winning Best Americana Album and Best American Roots Song for the track “24 Frames”. Something More Than Free resonated with critics and fans alike, selling over 150,000 copies, debuting at #1 on the Rock, Country and Folk charts and landing in numerous year-end lists. Isbell’s 2013 breakthrough album Southeastern won Album of the Year, Artist of The Year and Song of The Year (”Cover Me Up”) in 2014.

“Few roots-leaning songwriters have inspired such intense adoration,
or as much emulation, as Lucinda Williams.” – NPR Music

Album of the Year and Artist Of The Year nominee Lucinda Williams recorded her critically acclaimed album, The Ghosts of Highway 20 in the middle of arguably the most prolific period of her nearly four-decade career. Lauded by The New York Times, Pitchfork, and many more, the narratives for the album revolve around the 1500-mile stretch of Highway 20 that runs from Georgia to Texas. Williams’ experiences and connections to cities along the way are the basis for this compelling and uniquely personal album. Featuring some of the most expansive and experimental arrangements to date, the 14-song collection provides incredible sonic textures and ethereal tones, and showcases the three-time Grammy winner’s brilliant writing and weathered vocals. For more information on Lucinda Williams, click HERE.

“Mr. Millsap sings with spiritual fervor verging on rage – his voice ecstatic
and volcanic all at once.” – The New York Times

Parker Millsap’s sophomore album The Very Last Day is nominated for the 2016 Album Of The Year. Produced by Millsap and Grammy award-winning engineer/producer Gary Paczosa, the new album boldly showcases the growth in his arresting vocals and the depth of his songwriting. NPR Music called him “one of the most arresting and puckish young singer-songwriters to emerge in the Americana scene this decade”, and Parker also made his network television debut via CONAN (Click HERE). Millsap has been touring non-stop in support of The Very Last Day including performances at high profile festivals including Stage Coach, Austin City Limits Festival and Forecastle.

Emerging Artist Of The Year nominee John Moreland has been touring non-stop in support of his critically acclaimed album High On Tulsa Heat. Released last April the album was praised by outlets including The New York Times, Pitchfork, NPR Music, Entertainment Weekly, Rolling Stone Country and many more. Moreland was also the subject of an in depth feature in The Wall Street Journal (click HERE) and made his network television debut on The Late Show with Stephen Colbert (click HERE). Moreland’s poignant lyrics and sincere delivery connect to listeners in a rare way, and he possesses the ability to silence a loud room with just himself and a guitar.

“Shires is now part of a sorority of artists, such as Neko Case and Cat Power, who transcend categories like country and Americana.” – Texas Monthly

Amanda Shires’ fifth studio album My Piece Of Land, produced by award-winner Dave Cobb, will be released on September 16th. The critically acclaimed singer-songwriter and violinist reflected on the transition into motherhood, the importance of family and finding a true sense of place to write the album, which is being considered an artistic milestone for Shires. Entertainment Weekly called the collection a “compelling depiction of womanhood,” and the album is featured in Garden & Gun and Texas Monthly. For more information about Amanda Shires, click HERE.

BJ Barham’s debut solo album Rockingham is garnering critical acclaim for its lyrics and small-town narratives. Noisey called it “…storytelling at its finest,” TONE Audio praised his work as a “quietly powerful album,” and Elmore defined it as “a series of aural soundscapes as striking as any conceived by those two modern masters [John Mellencamp and Bruce Springsteen].” The American Aquarium frontman wrote the album after the impact of the Paris terrorist attacks of Nov. 13th, 2015. The shock gave Barham perspective on the moments and circumstances that helped shape him, leading to a fictional narrative of stories set in his hometown. Barham is performing solo shows and tour dates with his still going-strong band American Aquarium nationwide. For more information on BJ Barham, click HERE.

Performing at Songwriters In The Round Presented in Partnership with 30A Songwriters Festival: Thursday, September 22nd
The Bluebird Café @ 6:00 PM

“…Louisiana-raised Mary Gauthier has become one of Americana music’s most admired artists—across the U.S. and in her regular tours around the world.”
– The Wall Street Journal

New Orleans-bred Mary Gauthier’s album Trouble & Love garnered high praise from NPR Fresh Air, The Huffington Post, Los Angeles Times and more. Adored for her gift as a songwriter who shares deeply painful and personal stories that infiltrate the souls of her listeners, the critically acclaimed singer-songwriter has received countless accolades over the last decade with her six studio albums and live performances. She is currently performing solo shows and tour dates with Eliza Gilkyson and Gretchen Peters as part of the Three Women and The Truth Tour. For more information on Mary Gauthier, click HERE.

“Fans of Glen Hansard, Mumford and Sons, and The Civil Wars…
Penny & Sparrow should be your new favorite band.” – Baeble Music

“There’s a genuine yet subtle richness to each and every one of the selections, as well as a startling sense of insight.” – Consequence Of Sound

Sarah Jarosz has been touring in support of her latest release Undercurrent which was released via Sugar Hill Records earlier this year. Firmly securing her position as one to watch, Undercurrent garnered critical acclaim from the likes of Associated Press, Consequence Of Sound, NPR Music, American Songwriter, Brooklyn Vegan, LA Weekly and many more. She was also the subject of a Wall Street Journal feature (click HERE) who called the new album “direct, unadorned and thoroughly beautiful.” Sarah is a frequent guest on A Prairie Home Companion, and is about to embark on a fall co-headlining tour with Parker Millsap.

Surprise Performance To Be Announced

Critically acclaimed husband & wife duo Shovels & Rope will release their most personal and powerful album to date Little Seeds on October 7 via New West Records. Shovels & Rope previously took home two of the top honors with awards for Song of the Year (“Birmingham”) and Emerging Artist of the Year at the 2013 Americana Music Honors & Awards and were nominated for Duo/Group of the Year in 2015. Their incredible live performances and penchant for writing literate, Southern Gothic-infused songs have garnered praise from Rolling Stone, Huffington Post, USA Today, and more. View videos for two new tracks “St. Anne’s Parade” via NPR Music and “I Know” via Noisey. For more information on Shovels & Rope, click HERE.

“…intellectual music that pushes listeners to consider the world around them with acumen and insight.” – American Songwriter

Charlottesville, Virginia brothers Abe, James and Sam Wilson (aka rock outfit Sons Of Bill) return to Americana fest with several opportunities to hear the band live. The band’s latest release Love & Logic was well received by both U.K. and U.S. press, and produced by the Grammy nominated Ken Coomer. UNCUT called the band ”Gorgeous… Virginia’s scholarly heirs to R.E.M”, and The Guardian gave it 4 stars calling it ”purring Americana-tinged rock… one of those delightful surprises that music so rarely springs in the age of digital access and instant discovery.” For more information about Sons Of Bill click HERE.