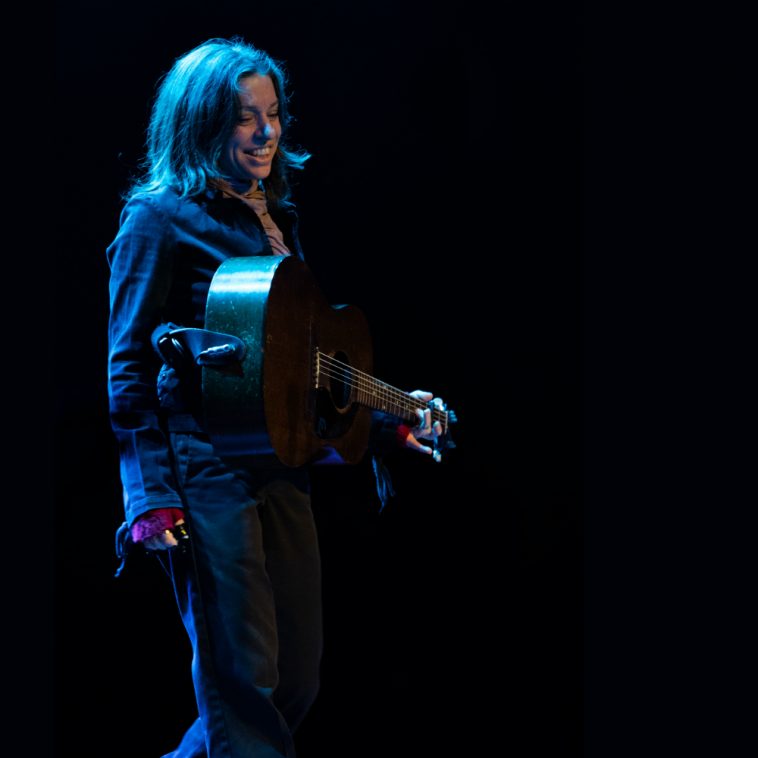 Singer/songwriter/feminist/activist author Ani DiFranco announced her next round of shows starting February 7, with special guest Jesca Hoop. The February tour supports DiFranco’s 2019 memoir, No Walls and the Recurring Dream and the accompanying No Walls Mixtape.  A full list of tour dates is below.

About joining the tour, Hoop notes, “Across the last shows of my November 2019 tour, Ani DiFranco would cross my mind as I sang to the rooms of loving listeners. This was unusual and remarkable. Having now received the call to support Ani, these “visitations” make a bit more sense. It is with joy and gratitude that I join the ride to warm the room for the first girl who lit a fire in me…and through her tiny enormous presence on stage communicated directly to me that ‘I CAN DO IT.’”

Critics and fans have raved about No Walls and the Recurring Dream. Accolades include:

“Ani DiFranco has written a memoir as fierce, freewheeling, and passionate as her music.”
– O, The Oprah Magazine

“Ani DiFranco has spent decades challenging the status quo, standing up for what she believes and creating honest, raw, music.” Her memoir is an extension of these passions.”
– Associated Press

“DiFranco manages to shed new light on how a young, talented woman created enough momentum to slingshot herself beyond her town’s suffocating gravitational pull and created an entirely new solar system, populated with an orbit of planets and moons of her own devising.” – Rolling Stone

On January 22, DiFranco will be awarded the prestigious ‘People’s Voice Award’ at the 2020 Folk Alliance International Conference. The People’s Voice Award is presented to an individual who unabashedly embraces social and political commentary in their creative work and public careers. Past recipients include Bruce Cockburn, Bonnie Raitt and Buffy St. Marie. On January 23, DiFranco will also host a panel at the conference discussing No Walls and the Recurring Dream, and on January 25 she teams up with Zoe Bookbinder and Leyla McCalla for “Art as Activism as seen through Zoe Boekbinder & Ani DiFranco’s Prison Music Project.”  The panel previews the forthcoming prison music album Long Time Gone as a template for combining art and activism.

Widely considered a feminist icon, Grammy winner Ani DiFranco is the mother of the DIY movement, being one of the first artists to create her own record label in 1990. While she has been known as the “Little Folksinger,” her music has embraced punk, funk, hip hop, jazz, soul, electronica and even more distant sounds. Her collaborators have included everyone from Utah Phillips to legendary R&B saxophonist Maceo Parker to Prince. She has shared stages with Justin Vernon, David Byrne, The National, Bob Dylan, Bruce Springsteen, Pete Seeger, Kris Kristofferson, Billy Bragg, Michael Franti, Chuck D., and many more.

Her most recent studio album Binary was released in June 2017 on Righteous Babe Records.  Over the years she’s performed at countless benefit concerts, donated songs to many charity albums, and given time and energy to many progressive causes. She has learned from and demonstrated beside Gloria Steinem, Jesse Jackson and Dennis Kucinich. In 2004, she marched in the front row of the March for Women’s Lives along with Margaret Cho, Janeane Garofalo, Whoopi Goldberg, and many others, later performing on the main stage. She has beaten the drum for voter registration and turnout with “Vote Dammit” tours in multiple presidential election years, including most recently in 2016. She’s currently on the board of Roots of Music, an organization that provides at-risk youth with support and musical education in New Orleans, and the creative council of EMILY’s List, which helps elect pro-choice Democratic women to office.