With their fusion of bluegrass instrumentation and folk-rock amplification, Rose’s Pawn Shop have spent the better part of two decades carving out an Americana sound that’s as diverse as their native Los Angeles. Their past releases offer a melting pot of modern-day roots music, shot through with electric guitar, fiddle, raw percussive stomp, and stacked vocal harmonies.  Anchored by the sharp songwriting of frontman Paul Givant, it’s a sound for campfires and car stereos for front porches and dive bars, for the heart as well as the heartland.

With Punch-Drunk Life, Rose’s Pawn Shop makes a long-awaited return after an eight-year absence from the recording studio. Things have evolved since the group’s previous album, Gravity Well earned high marks from Rolling Stone (who dubbed the record “a blast of 21st century pickin’-party music) and GQ (who praised the group’s knee-slapping bluegrass-y twang”). Bandmates have come and gone. Families have been built. Side projects have been launched. Meanwhile, Rose’s Pawn Shop has continued to expand both their artistry and their audience, thanks to a dedicated touring schedule that’s taken the band from the venues of Southern California to the fishing villages of Alaska to the mountain towns of the American Southwest.

We’ve always resonated with people who live in remote communities and far-flung locations,” says Paul. “We spend a lot of our time playing mountain towns like Madrid, New Mexico, connecting to the people who, like us, are out there searching for something.”

That search continues with Punch-Drunk Life. Recorded amidst the chaos of the Covid-19 pandemic, it’s a life-embracing album rooted in the lessons learned during times of struggle. “Old Time Pugilist,” the record’s dynamic opener, turns a boxing metaphor into a bold battle cry about fighting against life’s hurdles and hardships. “The Lonely One” finds Givant rededicating himself to the hardscrabble life of a road warrior. “Gratitude” celebrates the legacy of a departed loved one, while songs like “Ghost Town,” “High Lonesome,” and “Halfway Down the Road” coat themselves with the cinematic, sepia-filtered imagery of the band’s tours across North America’s forgotten places. Recorded by a band of genuine road warriors, Punch-Drunk Life swirls together its own geography: a place where endless highways, desert landscapes, and the long road toward home all converge.

Featuring contributions from guitarist/producer Zachary Ross, upright bassist Stephen Andrews, drummer Matt Lesser, and multi-instrumentalists Tim Weed and John Kraus, Punch-Drunk Life presents a new and improved Rose’s Pawn Shop. The songs are sharper, their melodies flanked by bursts of banjo and mandolin. The lyrics are storybook-ready. At the center of that evolution is Paul Givant, whose songs bear the signs of an articulate, well-read wordsmith who enjoys exploring not only his external world, but also his internal workings. “My writing has become more precise,” he says. “I’ve learned how to say more with less, and I’m embracing more pop sensibilities. Our earlier albums had a darker tint, but this one is more hopeful. It’s a reflection of the positive things in my life — my marriage, my relationships with friends and family — against a backdrop of the challenges we’re still up against.”

Rose’s Pawn Shop have a long history of rolling with the punches. Resilience is built into the band’s DNA, influencing everything from their name — a nod to Givant’s ex-girlfriend, Rose, who infamously reacted to the pair’s breakup by stealing the band’s equipment and pawning it across Los Angeles — to their commitment to finding a path forward in the face of of shifting lineups, growing responsibilities at home, and a global pandemic that brought their touring schedule to a standstill. Accordingly, the guys began recording Punch-Drunk Life during the thick of the pandemic, with each bandmate recording his parts remotely. As quarantine restrictions began to lift, they headed to Electro Sound Studios in the Hollywood Hills. The musicians took their time, capturing the fiery spirit of the band’s live performances without losing sight of their frontman’s measured melodies. The result is the band’s most vivid and vital work to date, with performances that match the poignant punch of Givant’s songwriting.

“Paul is always writing,” Andrews adds. “He never stops. Songs like ‘Ghost Town’ aren’t just songs to me; they’re a time and a place, too. He’s writing about the things we’ve done and the towns we’ve seen.”

An album about self-improvement, forward momentum, and hard-won optimism, Punch-Drunk Life might as well be the soundtrack to a world still regaining its footing after a series of crushing missteps. This is anthemic roots music, stocked with introspective songs that deliver universal messages of courage and conviction. Rose’s Pawn Shop may be punch drunk — it’s hard to avoid a few bruises while navigating the twists and turns of the ever-changing music industry, after all — but they’ve learned to hit back, too. They’ve toughened up, and with Punch-Drunk Life, they’ve delivered a knockout blow. 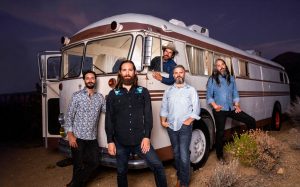 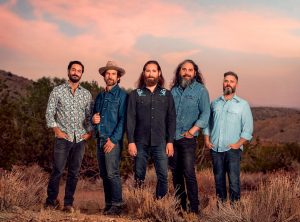 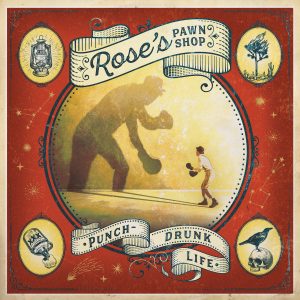