“I’m starting to realize that being an outlier and a weirdo––it doesn’t have to be a bad thing,” says Sarah Shook. Shook pauses, then adds with a grin, “It can be whatever you want it to be.”

Shook is home in North Carolina, talking about Nightroamer, the hotly anticipated new album from their band, Sarah Shook & The Disarmers. Backed by white-knuckle playing from Eric Peterson on guitar, Aaron Oliva on upright bass, drummer Will Rigby, and Phil Sullivan on pedal steel, Shook has pulled from Hank Williams, Elliott Smith, the Sex Pistols, and Shook’s own inquisitive, open, outlying self to create pop-savvy, honky-tonk punk that’s both an escape and a reality check––a re-opened wound and a balm. Relationships and life-changing realizations are dissected with honesty and humor, three tight minutes at a time.

“Where is the handbook for relationships that isn’t just how to keep your man around for 20 years?” Shook says, “Where is the offbeat situational relationship handbook? I feel like a lot of what I write is that––and most of the time, I don’t have the answers. I’m just asking the questions that we’re all asking.”

When Sarah Shook & The Disarmers released Sidelong four years ago, the irreverent quintet’s debut turned heads around the world. Then 2018’s follow-up Years hooked everyone from Rolling Stone to Vice. “This ain’t no country for hipsters or posers,” said No Depression. “It’s real, raw, mean-and-evil-bad-and-nasty bidness.” Then, the first two albums turned into a tease: The pandemic shut down the world, just as The Disarmers finished recording Nightroamer in Los Angeles. The band has had to sit on the album––until now.

Nightroamer is worth the wait. This is still a band whose recordings beg to be heard live, either in a punk-rock hole in the wall or honky-tonk roadhouse. Shook’s voice is crystalline––but boozy, too, with a cadence that sounds comfortable resting in the pocket before lagging, jumping, or cozying up to the offbeat. What initially may feel like a slip is actually a stroke––and listeners cannot get enough.

Shook is also a visible, vocal member of communities often relegated to societal margins. Out as bisexual since they were 19, Shook recently came out as nonbinary as well. For Shook, openness about their identity––as well as struggles including depression and addiction––is just as much about self-preservation as it is offering an outstretched hand. “When I talk about mental health issues, recovery, and addiction, it’s because I feel like life is too short to keep the good things we learn along the way to ourselves,” Shook says. “I think we each have a responsibility to share information that can transform lives in a literal, palpable sense.”

For Shook, it turns out that being honest is both liberating and an obligation. It’s also a form of therapy the rest of us can sing, scream, or two-step to.

Produced by Pete Anderson, Nightroamer is the confident next step fans hoped The Disarmers could take. “I think this record is different than ones we’ve done in the past. It feels every bit as expansive as I wanted it to feel,” says Shook. “I didn’t want there to be a shocking, jarring difference, but I definitely wanted it to feel like things are opening up. It’s a bigger feeling experience.”

Album opener “Somebody Else” slinks and jangles as Shook faces a grim truth. Recognition and frustration go toe to toe over thick electric guitar and pedal steel. “I was in a series of monogamous relationships that were incredibly unhealthy, emotionally and verbally abusive,” says Shook. “I had a revelation about myself, but I also had a revelation about abusers and how abusers operate. There’s kind of a double meaning in that song: If it’s not you, that person is going to find somebody else to abuse. And also, I realized my own pattern: If I’m not choosing this person to have a toxic relationship with, it’s going to be somebody else.”

Realizations that Shook refuses to wrap up in tidy, satisfying bows appear again and again throughout the record. Whether it’s about lovers or addictions or other demons, listeners witness the light coming on for Shook or others––and our own bulbs start flickering. Over crying guitars channeling classic country cool, “It Doesn’t Change Anything” offers empathy and intimate understanding, but it doesn’t offer answers. “It’s about addiction and depression, and it’s holding space for somebody. It’s just saying, ‘I acknowledge what you’re going through and the battles that you’re facing are valid,’” Shook says.

Shook takes aim at being trapped by feelings they wish they didn’t have in the driving “Been Lovin’ You,” while “Please be a Stranger” is a swinging, witty send-off. Hardcore honky-tonker “No Mistakes” is a self-aware plea, and post-punk anthem “Talkin’ to Myself” is a foot-stomping, self-aware look at our relationships with our own minds.

The band has never sounded better. “After the initial writing is done, it’s all collaborative with the band,” says Shook. “There’s no hierarchy. I think that’s part of what gives us a little bit of magic: We all have deep admiration for each other.”

The title track is an example of Shook’s ability to make us question what we think we know. It’s also one of Shook’s finest vocal performances on the album. “I Got This” is pop punk perfection, while “Believer” is a soaring, melodic masterpiece.

Oozing distorted 1950’s nostalgia before plummeting into bass-y, bone-rattling psychedelic rock, “If It’s Poison” is a stunner. It’s also Shook’s favorite song on the record. Tentatively hopeful and full of tenderness, the track argues the time may finally be right for would-be lovers to give it a chance. Like all of their songs, “If It’s Poison” is part of Shook’s real story. The relationship didn’t last––at least, not the way it could have. And for Shook, the song has become even more personal and cathartic. “Music can be so healing,” they say. “I don’t know how people cope without having some kind of creative outlet for all the crazy things that happen to us.”

Asked what they hope listeners experience, Shook is clear. “Music is one of the ways we can connect to other people,” they say. “That’s my hope: That people feel seen and they feel connected to something that brings them a sense of peace.”

Sarah Shook & The Disarmers Release New Video for “No Mistakes” 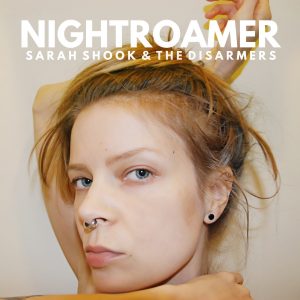 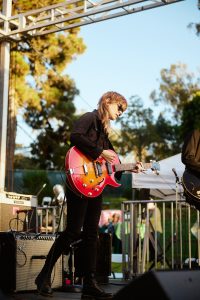 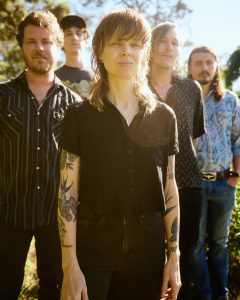 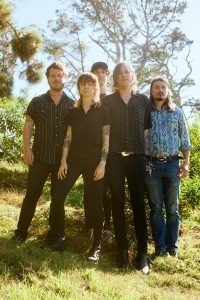 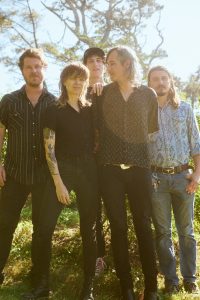 Holler “In Conversations With…”