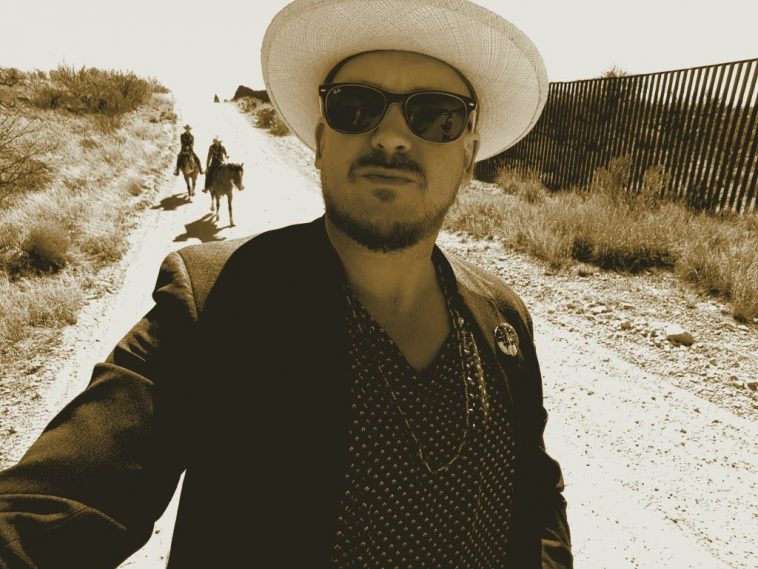 Singer/songwriter/activist David Huckfelt (of acclaimed Minneapolis group The Pines) reinterprets the definitive cowboy ballad “Bury Me Not” (The Dying Cowboy) on his upcoming album Room Enough, Time Enough out February 26th. “Bury Me Not” (often called “The Cowboy’s Lament” & “Bury Me Not on the Lone Prairie”) is considered one of the most famous folk songs in the American songbook and has been covered by Johnny Cash, Colter Wall, Burl Ives and many others. The video for Huckfelt’s rendition was filmed on Tohono O’odham Indigenous land along the US border just outside of Tucson, Arizona; watch HERE.

Huckfelt turns the original narrative of a dying man’s wish not to be abandoned on the prairie at the hands of westward expansion on its head, retold here as a warning to honor Native lands and respect for the Earth as a whole. Huckfelt, a long-time ally whose friendships and alliances with Native American artists and activists ring throughout the new record, says, “‘Bury Me Not’ has survived for generations in the public domain by perpetuating the myth of the heroic cowboy on the lone prairie, but as with many songs from deep in the American soil, the poetry tells another story as well. The Earth, the land itself, gets the last word on our efforts to subdue and conquer it. Manifest Destiny has left our spirits and the planet sick from our disrespect for the Mother. At the beginning of 2021, we have reason to hope that the myth of the conquering cowboy, driven by wealthy, corporate forces (“the men who own large droves and herds”) is at long last starting to crack. Trampling nature underfoot with our greed, we forget that with a single heave the Earth could shake us from her back, and that the power we believe we possess is delusion. “Bury Me Not” (The Dying Cowboy) stands like a tombstone on the open plains, reminding all who pass here to travel lightly with respect for the fierceness and grace of Mother Earth.”

As part of the acclaimed indie act The Pines as well as a solo artist, David Huckfelt has shared stages with artists from Mavis Staples and Emmylou Harris, to Trampled By Turtles, Calexico and Bon Iver. In 2018 Huckfelt received the prestigious Artist-In-Residence award at Isle Royale National Park on Lake Superior, where in two weeks he wrote the 14 songs that would become his solo debut Stranger Angels. Beginning in 2014 with his collaboration with American Indian Movement leader & poet John Trudell, Huckfelt has worked with an array of Native American artists and activists including Keith Secola, Quiltman, Winona LaDuke and novelist Louise Erdrich in the fight for social justice and protection for Mother Earth. In thousands of shows across the United States, Canada & overseas, Huckfelt’s grassroots following has grown from small-town opera houses, Midwestern barn concerts, and progressive benefit events to national tours and festival stages like Hardly Strictly Bluegrass, Edmonton and Calgary Folk Fests, and the legendary First Avenue club in his beloved Minneapolis home.