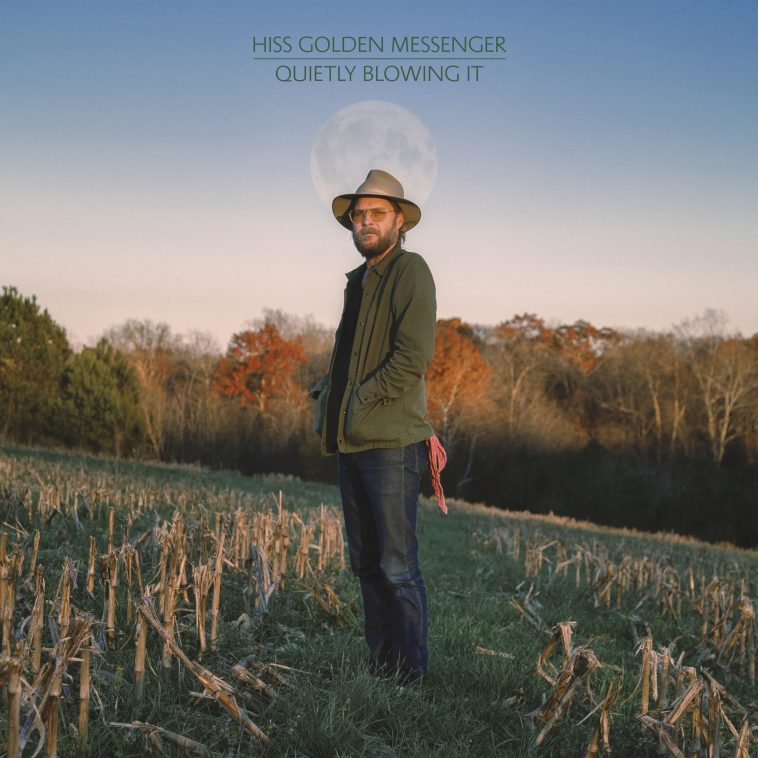 “…Hiss Golden Messenger has evolved into one of the most vital roots-music projects of the past decade—part solitary singer-songwriter outlet, part communal roots-rock collective.” – Rolling Stone

Nashville, TN – 2021 Grammy® nominee Hiss Golden Messenger will release the highly anticipated new album Quietly Blowing It (Merge Records) on June 25th. Written, arranged, and produced by bandleader/songwriter M.C. Taylor, Quietly Blowing It is the follow-up to 2019’s critically acclaimed release Terms of Surrender, which has been nominated for a 2021 Grammy® Award for Best Americana Album. Released in January, the soulful first single “Sanctuary” has spent the last three weeks at #1 on the Americana Radio Singles Chart.

Watch the video for the just-released new track “If It Comes in the Morning.” The KidEthnic-directed clip was shot in Oxford, NC, and features actor, playwright, and activist Mike Wiley in the lead. VIEW HERE

“‘If It Comes in the Morning’ was a song that was written in the spring and early summer of 2020. The country was on fire, and I kept thinking to myself, ‘What comes next?’” says Taylor. “Initially, I didn’t know how much hope to include in the song—I wasn’t feeling particularly hopeful myself in that moment—but I felt that it was important to remember that whatever happened, most of us were going to be fortunate enough to be given another day in which to enact what I feel are the most important and fundamental parts of being alive: joy, love, peace, the willingness to keep moving forward whether the cards fall in our favor or not. And in remembering, at least, that these feelings exist, I suppose it became a song of hope. The Staple Singers and Curtis Mayfield were very good at writing these kinds of songs, and I suppose I was looking to their music as inspiration for ‘If It Comes in the Morning.’ When I got stumped on a verse, I called my friend Anaïs Mitchell, and she got me straightened out. I’m very thankful for her help.”

Quietly Blowing It is an intimate and introspective offering that finds Taylor ruminating on themes of growing up, alienation, obligation, hope, purpose, family, class, self-discovery, healing, and rebuilding, fashioned with impressionistic tones. He says the record “feels like the most personal album that I’ve made because I’m not trying to explain anything to anyone except myself.” Taylor reckons with these turbulent times in deeply personal terms and seeks to inspire listeners to do the same. He elaborates in more detail about the album’s impetus in his insightful essay “Mourning in America.”

Musically, the new songs are steeped in gospel, Southern soul, indie folk, and alt-country with tinges of blues, rock, and jazz influences running throughout. Highlights include the minimalist R&B of “It Will If We Let It,” the rolling country groove of “The Great Mystifier,” and the heartfelt, smoky lament of “Painting Houses” (co-written with Gregory Alan Isakov). Quietly Blowing It features special guests that include Griffin and Taylor Goldsmith of Dawes, Zach Williams of The Lone Bellow, Nashville guitar great Buddy Miller, and producer/musician Josh Kaufman of Bonny Light Horseman.

Over the course of seven albums, the songs of Hiss Golden Messenger have resonated profoundly with music fans, fellow artists, and so many others. Taylor’s ability to shine light on our innermost human emotions, the ones that rarely reveal themselves, has never been more apparent than on Quietly Blowing It. The compassion, empathy, and genuine sentiment of Hiss Golden Messenger’s music have never been better suited for a time than right now