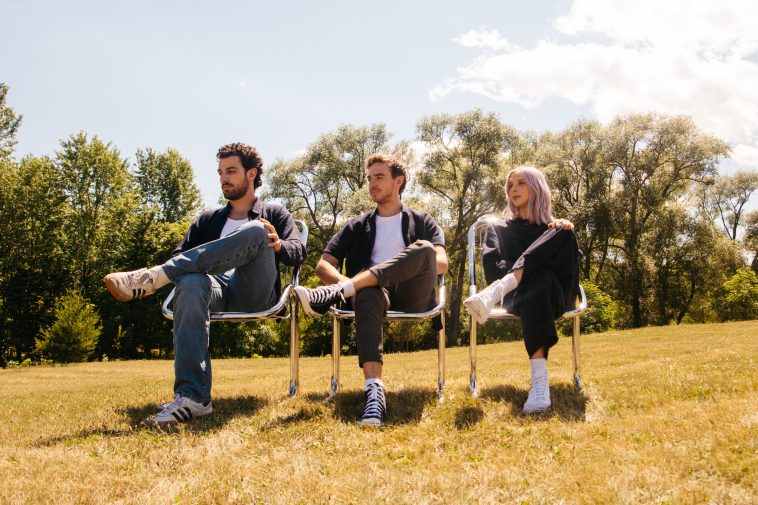 Nashville, TN –   Following numerous sold out shows on their first national headlining US tour, indie pop trio Wild Rivers is releasing “Better When We’re Falling Apart,” the latest single from their anticipated sophomore album Sidelines (Nettwerk), out February 4th. The poignant song is an ode to the toxic relationship, featuring that couple who is always on the verge of a dramatic break up. The track’s introspective lyrics and melodies also correspond to the band’s journey, navigating new experiences and adapting to adulthood. Wild Rivers are Khalid Yassein [guitar, vocals, keys], Devan Glover [vocals] and Andrew Oliver [lead guitar and synths]. Pre-order Sidelines HERE, and stream “Better When We’re Falling Apart” HERE.

This tour also highlighted the band’s commitment to environmental issues. Wild Rivers teamed up with REVERB on their Music Climate Revolution initiative to reduce its environmental footprint and eliminate greenhouse gas pollution. This tour eradicated 200% of total emissions including fan travel to and from shows.  In addition, the band has pledged $1 for each digital pre-save of Sidelines to support One Tree Planted, a non-profit organization focused on global reforestation.

Wild Rivers’ devoted fanbase came out in droves for their September and October shows, which sold out in Boulder, Seattle, San Francisco, Los Angeles, San Diego, Phoenix, Dallas, Nashville, Washington DC, New York and Boston. Their passionate fanbase, who has been anxiously waiting to finally see the band live, flocked to hear Wild Rivers’ deeply reflective yet undeniably relatable songs in a live setting. The music resonates profoundly as evidenced by their streaming success; over 200 million streams for Wild Rivers’ music overall, and over two million listeners and upward of 100,000 followers on Spotify. For those who missed the band on the road or simply want to relive it, tune into the global streaming event Wild Rivers- From The Sidelines on October 28 at 6pm PT. Tickets are on sale now at www.momenthouse.com/wildrivers.

About Sidelines, the band notes, “When you’re on the sidelines, you’re watching life go by, and maybe wishing you were wanting to play a different role. There’s a sense of detachment from the experience, which makes it challenging to be present in the moment. On the other hand, only time and space can offer a renewed context that’s otherwise difficult to see while you’re caught up in it. And we’ve literally been sidelined for a year to take it all in. In these songs, we’re making sense of it.”

Co-produced by Peter Katis (The National, Interpol, Sharon van Etten) and Wild Rivers, Sidelines was recorded in Connecticut, Los Angeles and Kingston, Ontario (where the band formed). Sonically, Wild Rivers pulls from a spectrum of sounds, imbuing pop, rock, indie and folk into each song’s blueprint.

Wild Rivers first caught audiences’ attention with their 2016 self-titled debut, followed by their acclaimed EPs, 2018’s Eighty-Eight and 2020’s Songs To Break Up To. The live setting is where they truly shine, and they began their authentic relationship with their fans while opening for celebrated acts like The Paper Kites, Donovan Woods and Jake Bugg. Channeling classic singer-songwriters like James Taylor and Fleetwood Mac has been vital to Wild Rivers’ connection with audiences.