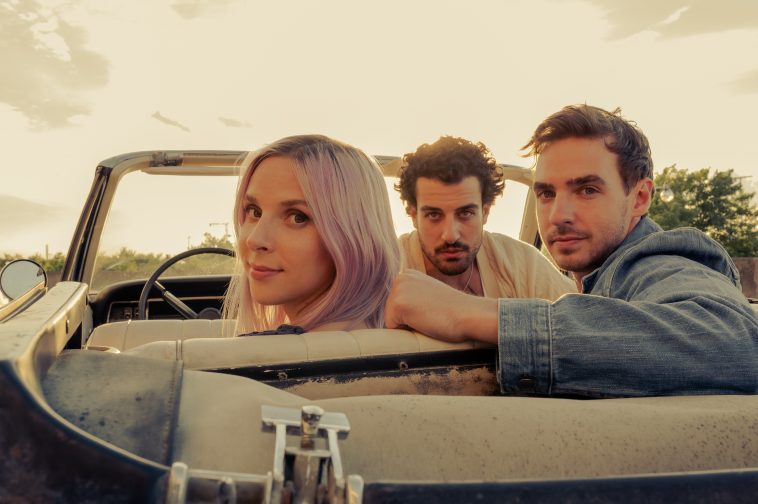 After a packed U.S. tour with numerous sell-outs, indie trio Wild Rivers is releasing “Neon Stars” in advance of their sophomore album Sidelines (Nettwerk), out February 4th. The stripped-down, contemplative song romanticizes a carefree love from the past, now seen through the lens of the more complicated present.  The band sings, “You were sleeping I was tracing / Every part of you a constellation / I knew you / But I was terrified.” Pre-order Sidelines HERE, and listen to “Neon Stars” HERE.

“Neon Stars” was co-written with celebrated singer/songwriter Caitlyn Smith. About the process, Wild Rivers’ Khalid Yassein [guitar, vocals, keys], says,  “Caitlyn is one of those people where you can tell that she was born to write songs. I had this idea that I couldn’t figure out for a long time, and after showing it her, within a minute she figured out the puzzle like it was nothing. Songwriters that have that magic and humility are a rare breed. Not to mention it was pretty special to hear her voice sing it in the room.”

Sidelines is where Wild Rivers poured their collective impressions about merging into their mid-20s — a strange, liminal age where it’s easy to romanticize childhood. Sidelines, according to Wild Rivers’ Andrew Oliver [lead guitar, synths], looks back longingly upon “the time when you are truly present and you’re not having this forward-thinking vision where you’re worried about the next thing.”

“A lot of [Sidelines] is about perspective and longing to be somewhere that you’re not, or trying to figure out how to get to a place that you want to be, whether it’s physically, emotionally,” says Devan Glover [vocals]. “I think we’re all kind of struggling with our sense of identity, in the stage of life that we’re in.”

Co-produced by Peter Katis (The National, Interpol, Sharon van Etten) and Wild Rivers, Sidelines was recorded in Connecticut, Los Angeles and Kingston, Ontario. The band first caught audiences’ attention with their 2016 self-titled debut, followed by their acclaimed EPs, 2018’s Eighty-Eight and 2020’s Songs To Break Up To. The band have amassed over 200 million streams for Wild Rivers’ music overall, and over two million listeners and upward of 100,000 followers on Spotify. Their fanbase was energized when the band returned to touring, as the band’s September and October shows sold out in nearly all markets including Seattle, San Francisco, Los Angeles, San Diego, Phoenix, Dallas, Nashville, Washington D.C., New York and Boston. Wild Rivers’ 2022 tour dates are below and tickets are at wildriversmusic.com.