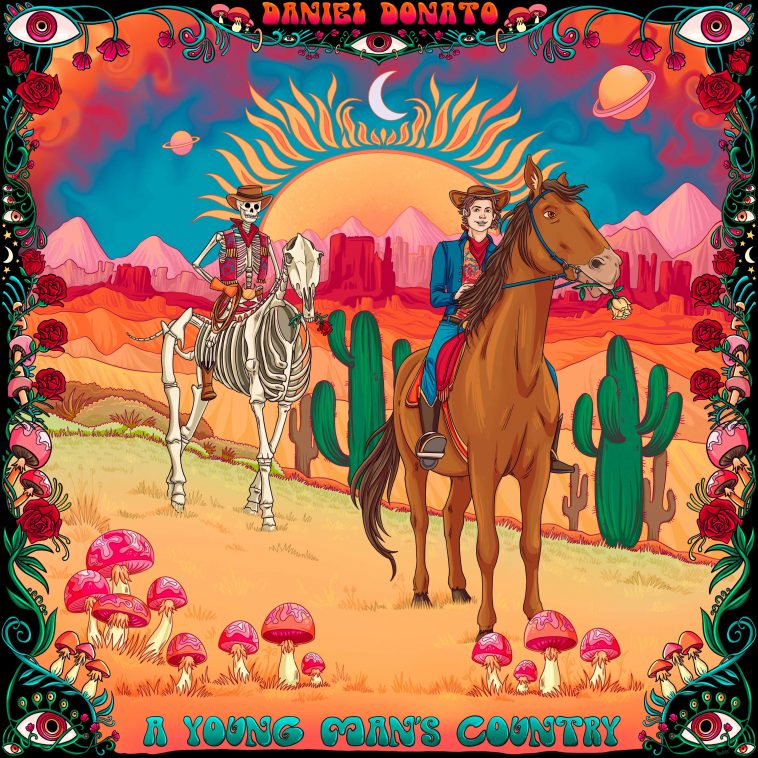 A Young Man’s Country, the debut album from 25-year-old Nashville guitar ace, songwriter and vocalist Daniel Donato is set for release on August 7th (13J Productions/Cosmic Country Music). A Young Man’s Country serves as an introduction to a gifted, young artist who merges his extraordinary guitar chops with traditional outlaw country, Americana and Grateful Dead influences to bring his brand of cosmic country into the 21st century. Listen to an example via the first single “Luck Of The Draw” HERE.

Donato’s musical journey is one of discovery, determination and epiphanies. Before he even picked up a guitar, he realized he had a natural aptitude for the instrument by playing the Guitar Hero video game incessantly. Donato’s “big bang” moment took place at 12 in the form of Guns ‘N’ Roses’ “Paradise City”. Hearing that song was his first major musical epiphany, not unlike seeing The Beatles debut on The Ed Sullivan Show. There was no turning back. He practiced his guitar day and night, whenever time allowed. He was on a mission and would not be deterred.

As a young teen, he began busking on Nashville’s Lower Broadway playing up to eight hours a day on weekends for tips. Epiphany number two came the day he snuck into the legendary Robert’s Western World and had his mind blown by one of the venues amazing house bands, The Don Kelly Band. He eventually got the call to sit in which led to 450+ shows with the band and the chance to play with some of the finest musicians in Music City. This musical education was invaluable.

Epiphany number three came at 18 in the form of a wonderful gift from one of his schoolteachers who saw him play at the famed honky-tonk. Donato’s teacher gave him 200+ Grateful Dead bootlegs and other live recordings that completely blew his mind while opening it up to endless musical possibilities. He began to incorporate his experiences and discoveries into what would become his signature style, cosmic country.

A Young Man’s Country features eight original songs and three covers that offer a glimpse into the barely tapped potential of Daniel Donato. His renditions of Waylon Jennings’ “Ain’t Living Long Like This”, The Dead’s “Fire On The Mountain” and John Prine’s “Angel From Montgomery” (recorded before his passing) find Donato as a distinctive interpreter. His own songs, such as album opener “Justice”, the infectious “Always Been A Lover” and the epic rocker “Meet Me In Dallas” showcase the promise of an ambitious young artist with no ceiling in sight.

Ambitious, creative and hyper-focused are apt descriptions of Donato, who has already amassed a large social media base with over 90k followers on Instagram before ever releasing an album. He also hosts his own podcast, “Daniel Donato’s Lost Highway,” where he already has an impressive list of guests including Brothers Osborne, Brent Cobb, Orville Peck and Garry Tallent of Bruce Springsteen’s E Street Band.

A Young Man’s Country was produced by revered guitarist Robben Ford (Miles Davis, Joni Mitchell, Yellowjackets, John Mayall) as the first project under 13J Productions, his newly minted production company. The album was recorded at The Sound Emporium in Nashville.