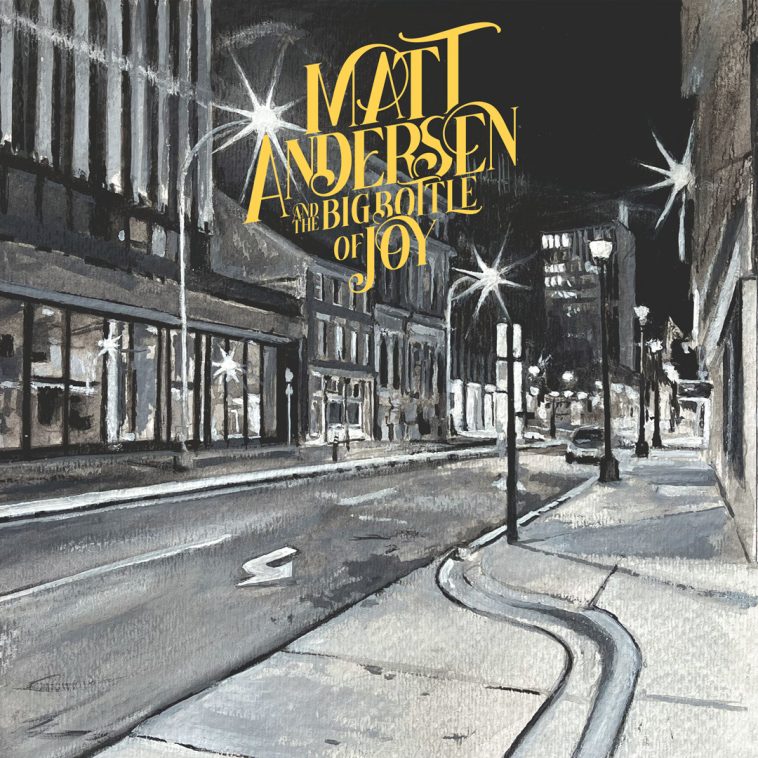 Acclaimed Canadian musician Matt Andersen announces the release of his latest album The Big Bottle of Joy, out March 10th on Sonic Records. On the album, the dynamic singer/songwriter and his mighty band, aptly named The Big Bottle of Joy, offer a dozen inspiring songs infused with soulful blues, rollicking Americana, thoughtful folk, and ecstatic gospel. For an early look at the release, check out the thumping live version of album track “What’s On My Mind” HERE.

On The Big Bottle of Joy, Andersen brings the inimitable power he has become known for in his electric live performances with a band that elevates his illustrious vocal prowess.  Andersen chose each member with their particular strength in mind, and tailored moods and arrangements and sections to highlight their substantial talents. The synergy of the players is clear in the seamless energy of the performances, making the collaborative musical effort the essence of The Big Bottle of Joy; we are all in this world together so let’s look out for one another.  “Being good to each other, you know, and taking care of each other – those are the biggest things I want to put out there,” Andersen says. “If we’re in it together, it’ll be a lot easier than trying to do it on our own.”

Each track on The Big Bottle of Joy is lifted by the stirring harmonies of Reeny, Haliey and Micah Smith, who add both intensity and joy to each note. The album kicks off with the mighty “Let it Slide,” an organ-drenched banger with a live and let live mantra.  “So Low, Solo” kicks the blues into high gear, while “What’s On My Mind” continues the freewheeling vibes with “We’ve got to learn how to live together, we’ve got a whole lot of living to do.” “Aurora” playfully shares the moments of a road entanglement, while the lonely “Only an Island” yearns for a love lost, lamenting the mistakes made along the way. The album closes with the romantic “Shoes” (co-written with Donovan Woods), ending with quiet, intimate moments, “dancing with the shoes we’ve got on.”  Musicians Geoff Arsenault (drums), Mike Farrington Jr. (bass), Kim Dunn (piano), Cory Tetford (guitar) and Chris Kirby (organ, piano) are the perfect accompaniments to Andersen’s lead vocals, which easily shift from forceful and booming to delicate and serene.

Matt Andersen has earned every fan through decades of touring across the globe, from small dimly lit clubs to majestic theaters and major festivals delivering soulful performances that run the gamut from intimate to wall-shaking. He has amassed over 23 million streams on Spotify and 26 million views on YouTube. In addition to headlining major festivals, clubs and theatres throughout North America, Europe and Australia, he has shared the stage and toured with Marcus King, Beth Hart, Marty Stuart, Greg Allman, Tedeschi Trucks Band, Randy Bachman, Jonny Lang, Serena Ryder, and more. Andersen nabbed the 2013 and 2016 European Blues Awards for Best Solo/Acoustic Act, was the first ever Canadian to take home top honours in the solo category at the 2010 International Blues Challenge in Memphis, won the CIMA Road Gold award in 2015, and has won multiple Maple Blues Awards. The Big Bottle of Joy is Andersen’s 10th studio album and follows 2022’s acclaimed House to House.

Catch Matt Andersen on tour in February, with Mariel Buckley in support. See full list of tour dates below.