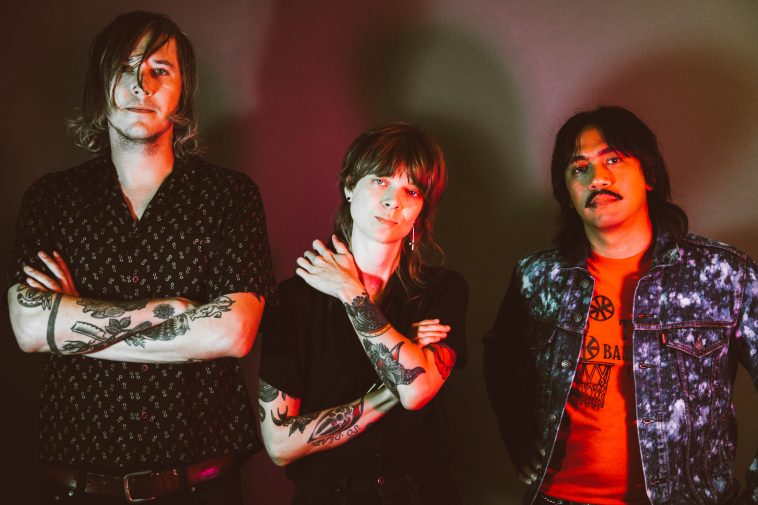 Mightmare, the indie rock/dark pop solo project of Sarah Shook, released a new music video for the establishment-thwarting, harmony-rich, marching lo-fi indie track “Red” – VIEW HERE. Directed by Georgia Krause, the video is a contrast of two sides – twilight and sunshine, the individual vs. the group, activities and introspection, bright colors and a wash of crimson. All of the imagery hints at something deeper, not unlike that of photographs coming to life in a darkroom, or a perspective being developed after time for reflection.

“White robes have served as symbols in an array of different systems of oppression: religious, economical, racial, gender-based, etc.,” Shook says. “I bore all of those systems in mind when I was writing “Red,” which is mostly about my personal experience with religious oppression and trauma. When you finally cut loose and run from a fanatical religious upbringing, you mourn. You mourn all the time you wasted believing a black hole of lies, you mourn the people still trapped in the vicious cycle of deeply dysfunctional fundamentalist thinking, you mourn the self you never got to know because you were so oppressed and repressed and stuffed into whatever mold you were supposed to slide into effortlessly. “Red” is a seedling of hope and door left unlocked for those still trapped in the hell of religious abuse.”

Mightmare recently released their debut album Cruel Liars via Kill Rock Stars to acclaim from New York Times, Holler, Brooklyn Vegan, Glide Magazine, No Depression, and others. The electronic-framed, dark indie rock solo project of Sarah Shook complements the North Carolina artist’s resume, branching from their country punk outfit Sarah Shook & the Disarmers with creativity and thought-provoking sound. Additional videos from Cruel Liars are available for singles “Enemy,” “Easy,” and “Saturn Turns.” WXPN called the album “an appealing sonic shift,” Glide described it as “an impressive step outside of the music Shook has already built a solid career around,” and Brooklyn Vegan said, “For this project, Sarah embraces brooding rock, synthy bedroom pop, and other indie-centric subgenres, and they pull it off just as masterfully as they do alt-country.”

Mightmare came about as an intrinsic need to create and express when Sarah Shook & the Disarmers were grounded from touring during the global pandemic in 2020. Fresh off becoming sober, Shook devoted newly available time and energy into the comprehensive process of making an album from start to finish. As a result, Cruel Liars is almost completely self-made and was written, produced, and engineered by Shook.

The band is currently on tour in support of the new album. See all remaining dates below.