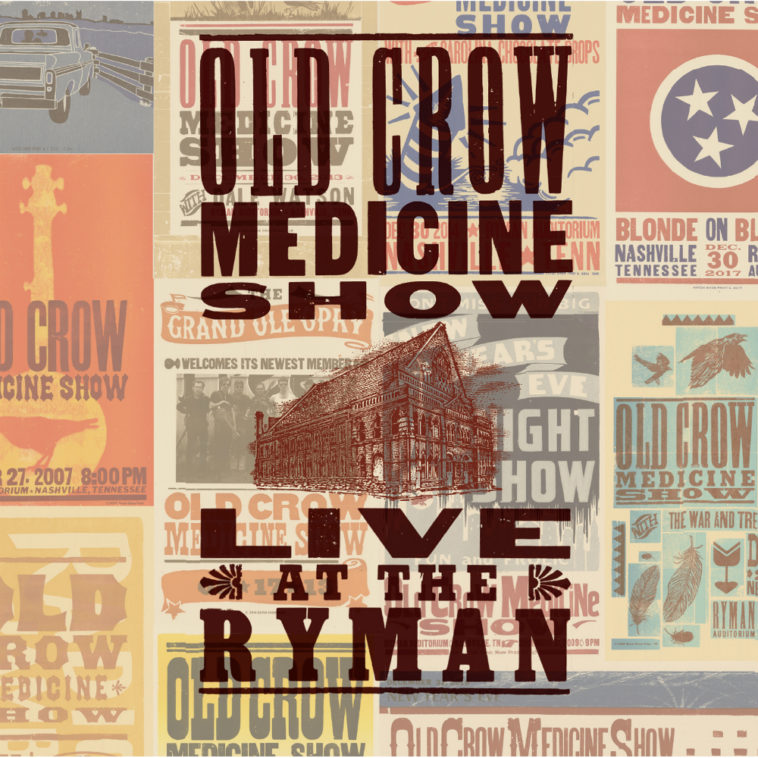 Grammy Award-winning modern American roots band Old Crow Medicine Show has announced the release of Live At The Ryman, due out October 4th on Columbia Records via The Orchard. Honoring the history and traditions of the legendary Ryman Auditorium, Live At The Ryman captures the raucous energy of Old Crow Medicine Show’s performances, recorded throughout their many headlining shows on the hallowed ground of Nashville’s Mother Church.

Old Crow Medicine Show had the incredible fortune of debuting at the Opry at the Ryman in 2001, and by 2005, were headlining their own shows at the venue. The band’s New Year’s Eve shows, which began in 2009, have become an annual pilgrimage, with their trademark explosive performances continuing to captivate audiences year after year. When combined with their numerous Opry performances, guest spots, television appearances and more, Old Crow Medicine Show has graced the Ryman stage over 40 times. As a band whose sound is entwined in the history of the building’s fabric and whose legacy is now engrained in the Ryman story, the time is ripe to release Live At The Ryman, a record which will preserve these memories for years to come.

Songs on Live At The Ryman range from tributes to the venue’s gloried past – including landmark American tunes “CC Rider”, a blues song recorded by “Ma” Rainey, “Will The Circle Be Unbroken”, made famous by the Carter family, and “Louisiana Woman, Mississippi Man”, which was performed on the Ryman stage by Loretta Lynn and Conway Twitty in the 1970’s – to Old Crow classics and new favorites including “Take ‘Em Away”, “Sweet Amarillo” and the celebrated hit and fan favorite, “Wagon Wheel”.

Old Crow Medicine Show has received critical acclaim from a variety of press including NPR Music, The New York Times, The Associated Press, Rolling Stone, Billboard and many more.  After 21 years of making music, the band continues to make modern musical statements while at the same time pushing their genre into the future, cementing their legacy as one of the most vibrant and forward-thinking traditional bands of their time.

Live At The Ryman Track Listing