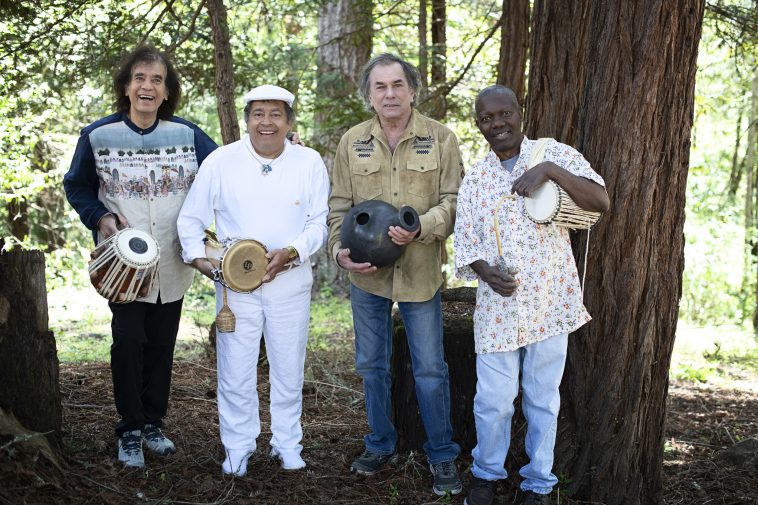 Today, two-time Grammy Award winning group Planet Drum is releasing the exuberant “King Clave” from their upcoming album In the Groove, out August 5th.  Master musicians  Mickey Hart (USA),  Zakir Hussain (India), Giovanni Hidalgo (Puerto Rico) and Sikiru Adepoju (Nigeria) are Planet Drum, and “King Clave” is based on a 6,000 person drum circle (which Hart directed in 2004) which establishes the rhythm that connects the musical cultures around the world. Watch the groundbreaking, uplifting video for “King Clave” HERE and listen via DSPs HERE.

This special, inspiring video created with Playing For Change features the legendary rhythm masters of Planet Drum and over 50 traditional drummers and dancers from around the globe.  “King Clave” is set to one of the most referenced and universally used rhythms called the ‘clave.’ The clave is the basis, serving as a skeletal rhythmic figure, around which various drums and percussion are played in most African, Caribbean, South American and New Orleans music.  Created and filmed during the pandemic, the video is a cinematic feat as these extraordinary collaborations were done remotely. This was made more remarkable as Hussain’s brothers, Fazal Qureshi and Taufiq Qureshi, and Hidalgo’s father, Mañengue Hidalgo, also joined this unprecedented session in the midst of an international lockdown.

“King Clave” is the centerpiece of In the Groove and highlights Planet Drum’s inspiring message of unity through music and the global community. Music is a tool of healing and compassion and in a world rife with division, “King Clave” comes at a much needed time, spreading connection and joy. Hart recently spoke with Relix and said, “Music creates a virtual world outside of normal consciousness, where you find empathy and love. With all the rage and hate going on, rhythm offers an incredible musical opportunity that is the opposite of that.”

In the Groove continues the legacy forged in 1991 with Planet Drum’s monumental self-titled original release, which remains one of the most successful percussion recordings of all time, topping the BillboardCharts for 26 weeks. Planet Drum won the first-ever Grammy Award for Best World Music Album and changed the perception of percussive world music forever. Their second effort, 2007’s Global Drum Projectearned their second Grammy Award for Best Contemporary World Music Album in 2009.

ABOUT PLAYING FOR CHANGE
Playing For Change (PFC) was created to unify the world through the power of music. The primary focus of PFC is to record and film musicians performing in their natural environments and combine their talents and cultural power in innovative videos called Songs Around The World. Creating these videos motivated PFC to form the Playing For Change Band and establish the Playing For Change Foundation—a separate nonprofit organization dedicated to supporting music programs for children around the world. To date PFC has produced over 400 videos, recorded over 1,200 musicians in 60 countries, and touched the hearts of over 2 billion viewers through music videos, performances and school programs.

The Playing For Change Foundation has created 17 music programs across 13 countries, engaging marginalized youth in diverse communities around the world. Over 40,000 people have been impacted by the foundation’s community development and empowerment efforts throughout our program regions and beyond.

This year, Playing For Change celebrates its 20th anniversary and aims to continue to create hope and inspiration for the future of our planet and spread peace and unity through music.