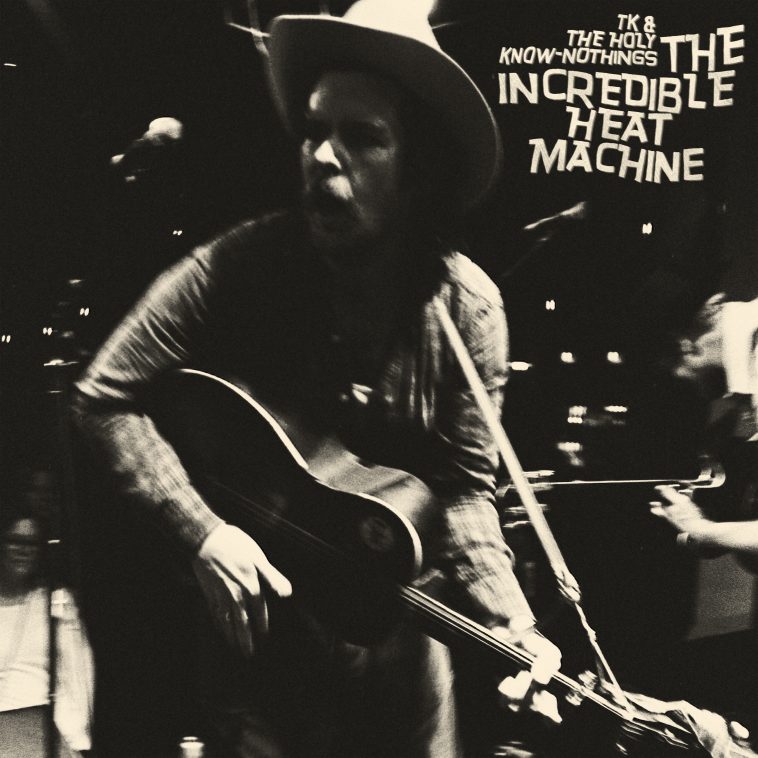 Hailing from Portland, OR, TK & The Holy Know-Nothings announce the band’s much anticipated sophomore album The Incredible Heat Machine out October 15th (Mama Bird Recording Co.). The band is led by frontman Taylor Kingman, whose equally irreverent, delicate and cerebral first-person narratives somehow merge seamlessly with the group’s bar band ethos. The Incredible Heat Machine takes the band’s *half-facetiously* self-described “psychedelic doom boogie” and delves further into the struggles of the working-class musician with themes of substance abuse and redemption, companionship as salvation and the ever-present shadow of disillusionment. Pre-order The Incredible Heat Machine HERE.

Groove-heavy first single “Serenity Prayer” shares the Sisyphean journey of a working musician who makes good for a few hours each evening playing at the local tavern before finding themselves inevitably drawn to a seat at the bar again. It’s an entreaty to oneself to find the strength to change tomorrow, as Kingman writes, “Grant me the serenity to pay for this in change,” and “Grant me the wisdom to know I owe the difference,” before always returning to, “But a friend behind the bar is a mighty fine deal.” Listen HERE.

The Incredible Heat Machine follows up the band’s 2019 debut Arguably OK and 2020’s B-sides EP Pickled Heat, which collectively introduced listeners to their distinct brand of unbound rock & roll infused with the strange, wide-open, outsider nature of Western country. TK & The Holy Know-Nothings amassed a devoted following as they performed sold-out shows throughout their home region and across the US. Like their last record, The Incredible Heat Machine was recorded live, with no overdubs, on stage at the OK Theatre in the quiet Eastern Oregon cowboy town of Enterprise.

With Arguably OK and now The Incredible Heat Machine, the music always leads with the unapologetic, thoughtful lyrics that Kingman crafts. Opener “Frankenstein” spins a tale of the wreckage left behind in the wake of a wild love. “Hell of a Time” is a wry account of a weary nobody tasked with hunting down fallen angels. Guitars rip though the title track, a soul-baring blast of personal destiny. The pure wit of “I Lost My Beer” leads straight into the rattling regret of hangover lament “Bottom of the Bottle”. Finally, the album closer “Just the Right Amount” ties the album’s themes together as Kingman places himself on stage, staring at the mic and the crowd, reflecting on the experiences and decisions that led to these songs.

TK & The Holy Know-Nothings are taking their show on the road, supporting Deer Tick and Cedric Burnside on select dates, and opening for JJ Grey & Mofro on their first West Coast tour in four years. A full list of dates follows.