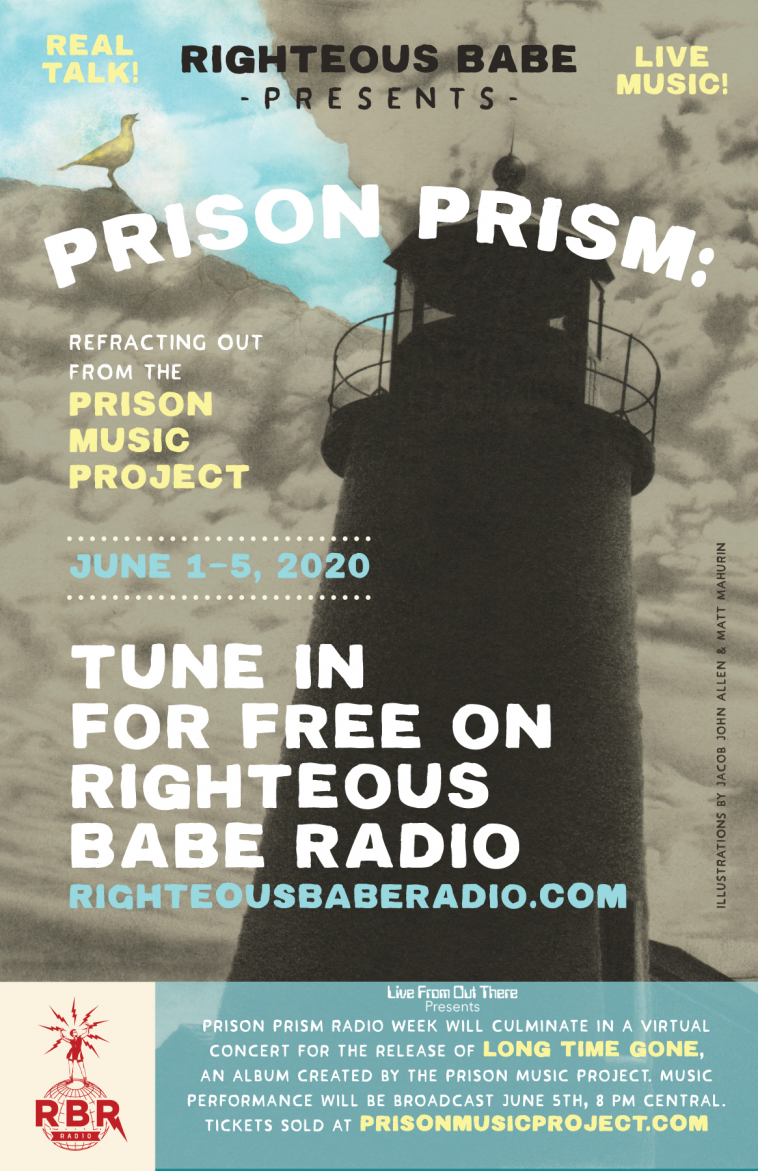 Long Time Gone is a musical collaboration between free artists and incarcerated or formerly incarcerated writers. Ten years in the making, the album will be released June 5th on Righteous Babe Records by the non-profit artist collective known as The PRISON MUSIC PROJECT.  All profits of the album sales will go to the Southern Center for Human Rights, an organization that strives for equality, dignity and justice for people impacted by the criminal legal system and fights for a world free from mass incarceration, the death penalty, the criminalization of poverty and racial injustice.

To mark the release of this album, RIGHTEOUS BABE RADIO will be broadcasting PRISON PRISM, REFRACTING OUTWARD FROM THE PRISON MUSIC PROJECT, a week-long radio festival dedicated to discussions about our criminal justice system. We will hear from incarcerated poets and lyricists offering their songs and stories and we will hear from some of the artists who helped bring those stories to life as part of the artist collective that created Long Time Gone.

For a look into the history of incarceration in America, the PRISON PRISM will feature the cultural lens of folk-singer Woody Guthrie through a prison-themed episode of Righteous Babe Radio’s Woody’s Voice and the field recordings of folklorist Alan Lomax in an episode of the podcast Been All Around this World titled ““Making it Hell,” Parchman Farm, 1933-1969.”

We will hear Incarceration in a Crisis, a virtual town hall led by Bernie Sanders, discussing the realities of the American prison system in the current age of COVID-19.  We will be highlighting an alternative methodology to our current system, known as Restorative Justice, by hearing from survivors, perpetrators, and public figures such as Angela Davis and Howard Zehr about their experiences with it. The Prison Prism will also provide a platform for organizations that sponsor arts and education programs in prisons today.  It is this type of organization that made the PRISON MUSIC PROJECT and its long-awaited album Long Time Gone possible.

The week-long radio festival will culminate in a virtual performance, PRISON MUSIC PROJECT SESSIONS: LONG TIME GONE ALBUM RELEASE CONCERT featuring Ani DiFranco, Zoe Boekbinder, Terence Higgins, free feral, Launa Reed and more.  Presented by Live from Out There, LONG TIME GONE will stream via LiveXLive.com at 8PM CT on Friday, June 5th. The performance will be filmed at Esplanade Studios in New Orleans before an invisible audience and will feature call-in readings by incarcerated poets Spoon Jackson and Samual Brown and break-away videos of Alex Batriz, Abraham Banks and Greg Gadlin, a few of the PRISON MUSIC PROJECT’s contributing writers.  Profits from this event will benefit Sister Hearts Re-Entry Program in New Orleans and The Center for Life Without Parole Studies.

For over two months, Live From Out There has been providing a wide variety of content streaming to the comfort of people’s homes while raising money for the greater music community. Rolling Stone, Billboard, Variety, Pollstar and Celebrity Access found the shows to be noteworthy. The platform has generated over $400K. It is now running its second virtual festival season and has a virtual summer tour series set to kick off on June 11th. For more information on all Live From Out There events, ticketing and information, visit livefromoutthere.com.

SCHEDULE and TUNE IN info for the free radio festival PRISON PRISM : REFRACTING OUTWARD FROM THE PRISON MUSIC PROJECT from June 1st – June 5th, 2020 is at RighteousBabeRadio.com