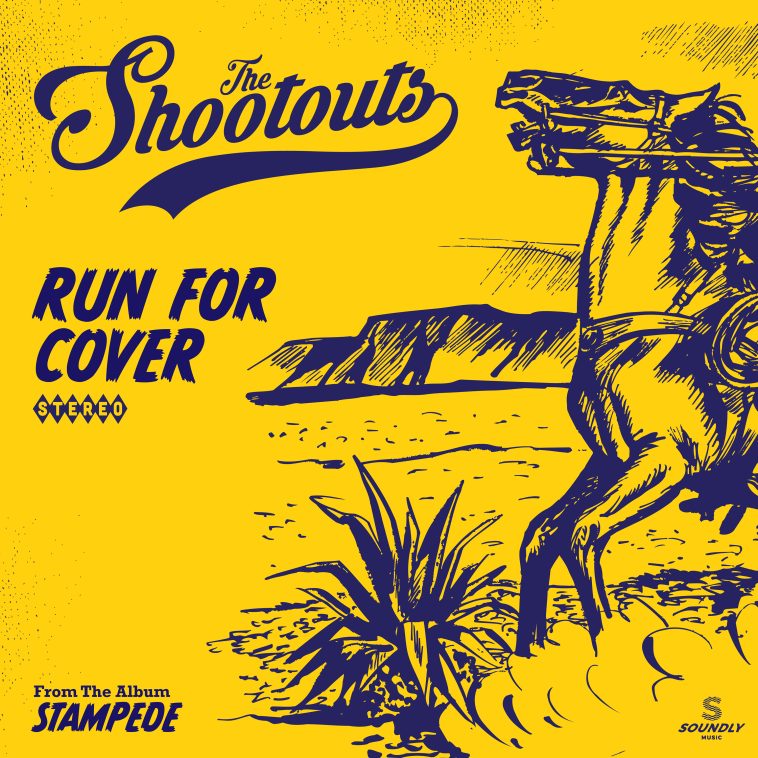 “I wrote ‘Run For Cover’ last summer while on a beach vacation in Hatteras Island, North Carolina,” lead singer Ryan Humbert says. “One day my friends all went down to the beach, and I took a $100 guitar to the front porch of the house and wrote this song. I’d been listening to a lot of music by Rockpile around that time — I’m a huge fan of both Nick Lowe and Dave Edmunds. This song is a ‘heart-on-sleeve’ love letter to their music and influence, as well as those that came before like Chuck Berry and Jerry Lee Lewis.”

Stampede came as a surprise to the band. Only months after the April 2021 release of their Top 10 Americana Radio album Bullseye, The Shootouts received word that legendary singer Ray Benson would produce their next album and they quickly headed back into the studio. In addition to production duties, Benson and members of Asleep at the Wheel contributed to the song “One Step Forward.”

Additional appearances include the cream of the Americana music crop: Raúl Malo of The Mavericks (on “I’ll Never Need Anyone More”), Stuart (“Better Things to Do”), Jim Lauderdale (“Tomorrow’s Knockin’”), and Buddy Miller (“Anywhere But Here”).

“Stampede encompasses all forms of American roots music, which is no small feat to do well,” Benson says. “If you don’t already know The Shootouts, you will now!”

The Shootouts’ sound is reflective of their Northeast Ohio Rustbelt roots, steeped in many familiar things but still its own: an energetic fusion of Americana, honky tonk and Western swing that Shootouts fans often refer to as “country music for people who don’t like country.” And while their hometown of Akron, Ohio – the city that produced the Pretenders, the Black Keys, and Devo – isn’t a place normally associated with country music, these influences are as integral to their sound as those of the country music greats.

The band will take their high-energy stage show on the road with a full-scale spring 2023 tour in support of Stampede, with more dates to be announced soon.

Upcoming 2022 Shootouts tour dates are below and found here: