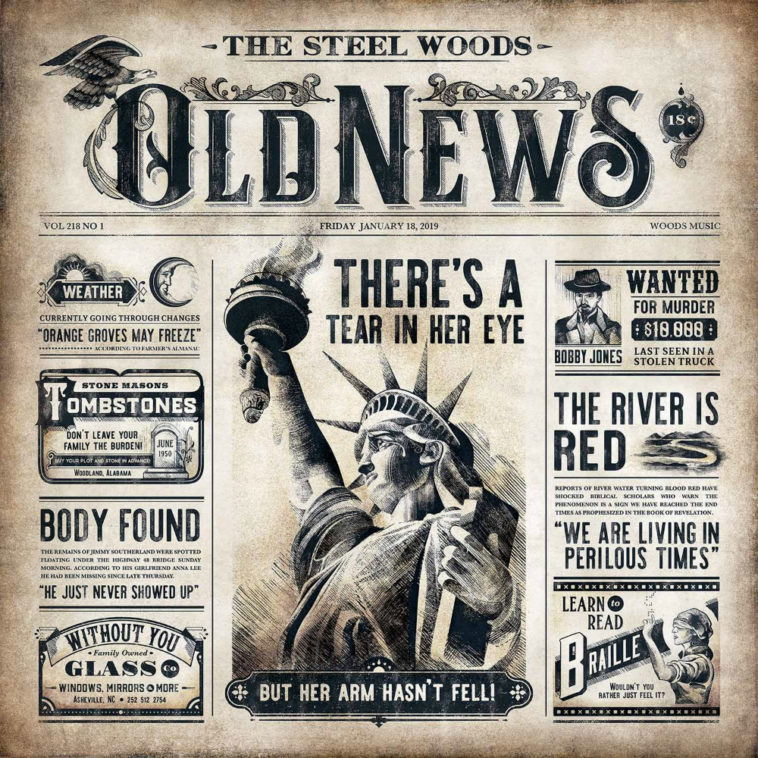 Old News, the new album from Nashville based southern-inspired rock band The Steel Woods is set for a January 18th release via Woods Music/Thirty Tigers. Centered around the soulful and commanding vocals of lead singer Wes Bayliss and the instrumental prowess of guitarist Jason (Rowdy) Cope, Old News makes a statement in the continuing evolution of The Steel Woods as a unit and the Bayliss/Cope combo as songwriters, something their 2017 debut Straw In The Wind only scratched the surface of. To listen to the title track of Old News click HERE.

Over the last two years The Steel Woods have built a loyal and passionate fan-base through their road warrior touring mentality and extraordinary live shows. Whether headlining or supporting artists such as Dwight Yoakam, Lynyrd Skynyrd, Jamey Johnson, Cody Jinks, Miranda Lambert, Blackberry Smoke and many more, The Steel Woods consistently convert audiences with each performance. Click HERE for a full schedule of The Steel Woods tour dates.

The themes reflected on Old News range from perseverance (“Wherever You Are”, “All of These Years”), to unity (“Blind Lover”) to hope and resilience in the stand out title track “Old News”.  Their belief in finding common ground through shared life experiences and a musical connection was inspired by the conversations the band had with people they met on the road.

As with their acclaimed debut album, The Steel Woods again included a Black Sabbath cover (“Changes”), but also felt the need to acknowledge some important artists we have recently lost. The four tribute tracks honor Tom Petty (“Southern Accents”), Merle Haggard (“Are The Good Times Really Over (I Wish A Buck Was Still Silver)”), their dear friend Wayne Mills (“One Of These Days”) and Gregg Allman (“Whipping Post”).

The Steel Woods are a band steeped in Southern culture with a modern approach and powerful intensity in live performance. Though their style is unapologetically Southern Rock and Rock, just pull back the layers to find lyrics that feature passionate storytelling and messages that resonate.