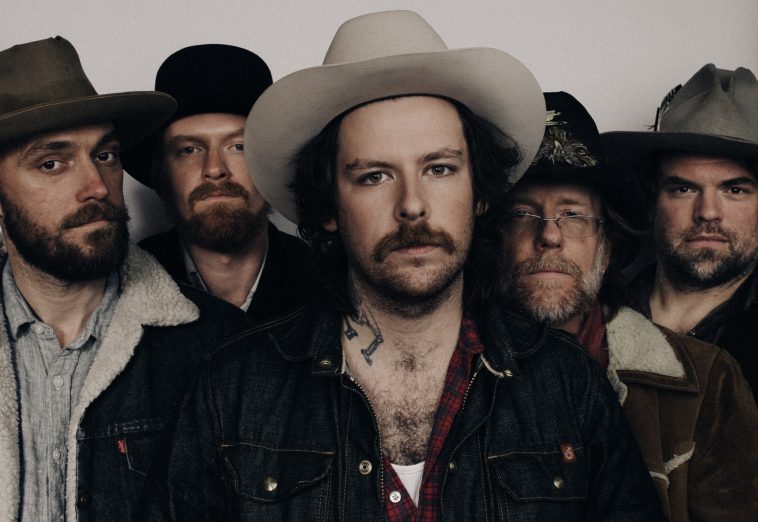 Hailing from Portland, OR, TK & The Holy Know-Nothings released the kaleidoscopic clip for “Bottom of the Bottle”, the second track out from the band’s much anticipated sophomore album The Incredible Heat Machine out October 15 (Mama Bird Recording Co.). The half-animated, almost Lynchian visual has all the characteristics of a surrealist treasure including a trio of witches, a mysterious wizard, a pervasive barfly and a miniature Claymation version of frontman Taylor Kingman designed by renowned L.A. artist Julian Small-Calvillo. Watch the video HERE and pre-order The Incredible Heat Machine HERE.

A hangover lament, “Bottom of the Bottle” is a rattling track that spotlights Kingman’s playful lyricism, textured voice and unconventional song structures. The song, described by Kingman as a “coming-of-alcoholism story set to the beat of a runaway chuck wagon captained by a demonic Bob Wills while it spirals down the drain” was added to Spotify’s “Emerging Americana” playlist last week.

“The music video for ‘Bottom of the Bottle’ is the blood, sweat and tears of Julian Small-Calvillo, a wildly talented cartoonist, animator and puppeteer based in LA,” said Kingman. “He made this thing in less than two months, and that will forever blow my mind. The guy’s a madman, but a madman you’d take home to meet your mama.”

Ahead of The Incredible Heat Machine’s October release, the band put out groove-heavy first single “Serenity Prayer” and its accompanying video that recreates the ambiance of a dive bar. Listen and watch HERE. The forthcoming record follows up the band’s 2019 debut Arguably OK and 2020’s B-sides EP Pickled Heat, which collectively introduced listeners to their distinct brand of unbound rock & roll infused with the strange, wide-open, outsider nature of Western country. This time around, they’ve upped their self-described “psychedelic doom boogie” with an LP that perfectly encapsulates the raucous yet languid feeling of a late night at your neighborhood watering hole. Like their last record, The Incredible Heat Machine was recorded live, with no overdubs, on stage at the OK Theatre in the quiet Eastern Oregon cowboy town of Enterprise.

TK & The Holy Know-Nothings amassed a devoted following as they performed sold-out shows throughout their home region and across the US. The band is once again taking their show on the road, supporting Deer Tick and Cedric Burnside on select dates, making their debut at Nashville’s famed Americana Fest, playing a number of shows with Extra Gold and opening for JJ Grey & Mofro on their first West Coast tour in four years. A full list of dates follows.

For more information about TK & The Holy Know-Nothings, please contact
Karen Wiessen or Bobby Crane at All Eyes Media (615) 227-2770