1960—Willie Nelson arrives in Nashville. “Nashville was a struggle. There were good moments, but it was an uphill battle… With all the music coming out of Nashville—all the great musicians and legendary producers—you’d think I’d be a natural fit. I never was. For that I don’t blame Nashville. I blame my own peculiar nature…” he writes in It’s a Long Story: My Life. One night, Willie was drunk (“I was no longer in my right mind. I was in my who-gives-a-fuck mind… I got up from the barstool and walked out into the cold. I didn’t have a heavy coat, just a denim jacket, but the freezing temperature didn’t bother me. The chilling wind didn’t bother me. The snowfall didn’t bother me. Nothing fuckin’ bothered me. The city was still. Hardly any traffic. No one on the street except me. A weird peace came over me as I walked off the sidewalk into the middle of the street, where—don’t ask me why—I decided to lie down and rest… I considered the possibility that a car might well roll over me. I guess I must have been okay with that possibility because, for at least ten minutes, I didn’t move… After I lay there awhile, I simply got up, shook off the snow, and strolled back into Tootsie’s. No one had seen what I had done.”

November 16, 1964—Bobby Bare calls Chet Atkins from a pay phone somewhere between Phoenix and Las Vegas, and tells Atkins that Waylon Jennings is the best thing since Elvis. “He is so good, he deserves to be on a major label,” said Bare, who heard Jennings’s “Just to Satisfy You” on the radio, while driving on Camelback Road in Phoenix. Chet calls Waylon and asks if he’d like to be on RCA.

1965—Cowboy Jack Clement moves back to Nashville from Beaumont, Texas. Kristofferson arrives in Nashville, in full Army uniform. Decides to stay here. Gets a job as a janitor at Columbia Recording Studios. Billy Joe Shaver moves to Nashville, hitching a ride on the back of a cantaloupe truck. Waylon moves to Tennessee, sharing a one-bedroom apartment with Johnny Cash at the Fontaine Royale Apartments in Madison.

Early 1969—Kristofferson leaves Buckhorn Publishing and signs with Bob Beckham’s Combine Publishing. “It was Beckham that changed everything,” Kristofferson told Michael Streissguth. “That office would be, at the end of the day, filled up with songwriters. Good ones. Guys that didn’t even write for him, like Mickey Newbury, and Shel Silverstein. It was a place where everybody would get at the end of the day, sit and pass the guitar around, try to knock each other out.” Kristofferson sings “To Beat the Devil,” “Jody and the Kid,” “Best of All Possible Worlds” and “Duvalier’s Dream” for Fred Foster, who says he can sign with Combine on the condition that he also sign with Fred Foster’s affiliated label, Monument. “He said, ‘Man, I can’t sing. I sing like a fucking frog,’” Foster said. “I said, ‘Yes, but like a frog that can communicate. And a frog that can communicate is good enough for me.’” The next day, Kristofferson signed two contracts, one with Monument and one with Combine.

Summer, 1970—Armadillo World Headquarters opens at 525 ½ Barton Springs Road in Austin, TX. Eddie Wilson was the owner. He also managed Austin psychedelic pioneers Shiva’s Headband. Artist Jim Franklin did the opening night poster and was involved with the Armadillo from the start.

November 23, 1972—Rolling Stone: Chet Flippo writes about Willie for the first time, on page 68, in a four-album of Waylon’s Ladies Love Outlaws, Tom T.’s The Storyteller, Willie Nelson’s The Willie Way, and Conway Twitty’s I Can’t Stop Loving You/(Lost Her Love) On Our Last Date. “While Hall has already been acclaimed by many, Willie Nelson has generally been overlooked. Yet he is probably the most underrated writer in America today.” “Nelson recently moved back to Texas from Tennessee and is playing more and more to youthful audiences. At a recent concert in Austin, the crowd of 2,000 was almost evenly divided between young, long-haired listeners and middle-aged country fans.”

“Willie’s buddy, Waylon Jennings, has more than once been called the best country singer in the world and at times he lives up to that impossible title. He’s like a tough, savvy minstrel, a maverick wanderer who’s still able to rejoice in life.”

February 1, 1973—Bobby Bare records “Ride Me Down Easy” by Billy Joe Shaver,” “Rosalie’s Good Eats Café” by Shel Silverstein,” and “The Winner” by Shel Silverstein, at RCA Studio B, between 10 a.m. and 1 p.m. This is probably not the finished version of “Rosalie’s Good Eats Café,” as it only clocks in at five minutes. But it indicates that Bare was producing his own music. The artists were gaining control.

October 16 and 17, 1973—Big change for Waylon, who goes to Glaser Sound (919 Nineteenth Ave. S.) with Willie Nelson and records “Louisiana Woman,” “Pick up the Tempo” and “Walkin’.” This is Waylon’s first session at Glaser Sound. The songs were produced by Waylon and Willie. Waylon on guitar, Larry Whitmore, Richie Albright, Duke Goff, Reggie Young,” Kyle Lehning (on piano and organ, and also engineer) and Willie on rhythm guitar. All arranged by Waylon. This album was recorded in violation with RCA’s contract with the engineers’ union. RCA was not supposed to release any record that wasn’t cut with an RCA engineer, and RCA artists had to use RCA studios whenever they were within a two-hundred-mile radius of Nashville. “In the face of my stubborn refusal, RCA bit the bullet,” Waylon wrote in his memoir. “They shipped the record and violated their contract with the union. That broke the whole system’s back.”

June of 1974—This Time album goes Number One. Waylon’s first chart-topping album. Waylon shifts his base of operations to Hillbilly Central. “There was a freedom there that I didn’t have any place else,” Jennings wrote in his memoir.

October 14, 1974—Nominated for male vocalist of the year, Waylon Jennings refuses to play on the CMA Awards show after producers ask him to cut “Ramblin’ Man” in half, to save time. Later, he told Record World, “I guess it looks like I’m a troublemaker, but really I want to get along with people and have everything run smooth… I thought they expressed an attitude that did not show respect for me as an individual or for country music. I felt I had to take a stand. I really hated to leave and do all that but I couldn’t let them walk over me.”

December 19, 1974—Rolling Stone: “Mr. Bojangles’ Dance: The Odyssey and Oddities of Jerry Jeff Walker,” on page nine, by Douglas Kent Hall. Photo by Tom Wilkes. “I saw something floating in the swimming pool. ‘Jerry Jeff?’ I called. ‘Is that a real TV.’ ‘Yeah.’ ‘What’s it doing there?’ ‘Floating… sonofabitch never would sink.'” “I flash back to a backstage scene before a Jerry Jeff performance in New York. Someone brought a girl in to meet him. She was blonde and excited and apparently had rehearsed what she wanted to tell him for so long that she could hardly say it. ‘I never really think of you as just a singer,’ she blurted. ‘I think of you more as a poet.’ He fixed her with a steady gaze. ‘Yeah,’ he said, ‘I’m trying to get over that.'”

May, 1975—Willie Nelson releases Red-Headed Stranger, with his guitar, Trigger, at the forefront of the sound. The album would spend 120 weeks on the charts, and reawaken CBS records. The album is the first commercial blockbuster of the Outlaw era.

January 12, 1976—Wanted! The Outlaws released on RCA. Chet Flippo wrote the liner notes. This album featured Willie, Waylon, Jessi and Tompall. Waylon agreed to this compilation album only after securing Tompall a spot on it, via RCA Nashville chief Jerry Bradley. Chet Flippo wrote the liner notes: “Call them Outlaws, call them innovators, call them revolutionaries, call them what you will, they’re just some damned fine people who are also some of the most gifted songwriters and singers anywhere.”

December 6, 1976—Wanted! The Outlaws certified platinum by the RIAA.

August 23, 1977—Waylon Jennings was co-producing a Hank Williams Jr. album at American Sound Studios on Seventeenth Avenue South, next to Waylon’s office. A package in Waylon’s name was unsealed at the airport, and federal drug enforcement officers confiscated twenty-two grams of cocaine, and sent the rest to Waylon. Waylon’s secretary, Lori Evans, picked the package up at the airport. DEA officers tailed her to Music Row. She walked into the studio, where Waylon was in the vocal booth, readying himself to sing harmony vocals on “Storms Never Last.” Evans stepped into the control room and dropped the package on a chair. Waylon came into the control room, checked the contents of the package, and went back to the booth. Co-producer Richie Albright cued up “Storms Never Last,” and Waylon sang while feds gathered at the back entrance, where a security guard pointed them to Albright. When they approached the control room, Albright bore down on the talkback button so Waylon could hear. Then all hell broke loose. Waylon was charged with conspiracy to possess and distribute cocaine. The event inspires Waylon’s “Don’t You Think This Outlaw Bit’s Done Got Out of Hand,” a Top Five hit in 1978.

1978—While there was no “official” end to the Outlaw era, it was dissipating in 1978. Willie had moved from Texas to Malibu, and he and Booker T. Jones collaborated on Stardust, an album of standards that was the polar opposite of Willie’s outlaw classics. Waylon’s drug habit derailed his career momentum, and it would be years before he cleaned up. Country radio stations began to favor slicker, pop-leaning efforts from a spruced-up group of photogenic performers. The Armadillo World Headquarters was struggling to stay financially afloat. And Waylon’s “Don’t You Think This Outlaw Bit’s Done Got Out of Hand” became something of an epitaph for one of country music’s most creatively satisfying and influential eras.

Outlaws & Armadillos Video: A Brief History of the Outlaw Movement

Are You Ready For The Country? 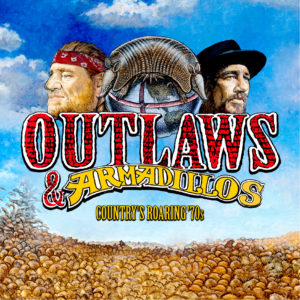 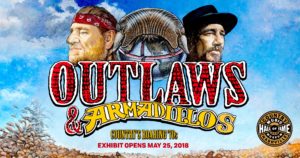