‘Songhoy Blues has always been about resistance. We started the group during a civil war, in the face of a music ban, to create something positive out of adversity’ – Aliou Toure, lead singer Sons of Mali.

And now, with the upcoming release of their scintillating new album, Optimisme, these blues brothers from Bamako officially announce their arrival and their intention to continue singing, playing & dancing their way into the hearts & minds of music fans everywhere. This 11-song, multi-lingual album is a breakthrough effort, led by the infectious & anthemic lead single, “Worry”, and steeped in deep traditions of classic Malian music & desert blues, fused with an urgent & super-charged sound of now. The album was produced by Matt Sweeney of beloved indie rockers Chavez, who’s worked with a host of celebrated artists including Johnny Cash, Run the Jewels, El-P, Cat Power, Will Oldham & Jake Bugg, and recorded & mixed by Daniel Schlett (The War on Drugs, Modest Mouse, Ghostface Killah) in Brooklyn, NY.

Born from civil war & a shared rejection of Sharia law nearly 10 years ago, Songhoy Blues embody a unique & remarkable journey from refugees to budding rock stars. Featured in the 2015 award-winning documentary “They Will Have to Kill Us First” about the plight of musicians in war-torn Mali, these are 4 young men with firsthand knowledge of the violence & vagaries resulting from a country torn by tumult & divided by ideology. Their response has been to fight back using the most powerful weapon they have – their music. Now how fucking punk rock is that, you ask? How about Iggy Pop-level (who featured on their 2017 single, “Sahara”).

Songhoy Blues is a band whose experiences in Mali have opened their eyes to universal problems plaguing people everywhere. Using the pain and lessons learned from having to leave their hometowns in northern Mali, the band realizes that human rights is a concept that extends far beyond what they have seen with their own eyes and far beyond just the borders of Mali. In order for the band to see their homes restored, they understand the fight must be fought on all fronts, for everybody across the spectrum. They are no longer refugees or exiles or four people with instruments—they are Songhoy Blues, a musical voice for empowerment and equality.

Working with Matt Sweeney, who encouraged the band to make the album they want to make, Optimisme confronts our world today. On “Badala” and “Gabi,” Songhoy Blues seeks the empowerment of women, asking for centuries-old misogynistic practices to be done away with. With “Worry,” the band advises both the young and the old that positive vibes and persistence are the best tools to fight our struggles. In “Assada,” the band praises and thanks the everyday warriors who wake up each day to sweat for the betterment of their communities and in “Dournia,” the band laments the lack of compassion and empathy between humans today in the face of increasing materialism and selfishness. “Bon Bon” warns of being fooled by shiny promises, and in “Barre” the band asks for the youth to get involved at home for change while warning off those who wish to divide in “Fey Fey.” Each time Songhoy Blues steps to the mic on Optimisme the band confronts, consoles, praises, thanks, and encourages the listener toward a better world tomorrow.

Discovered by Damian Albarn’s Africa Express, the band then connected with Nick Zinner of the Yeah Yeah Yeah’s (who produced their debut album, Music In Exile). First signed by The Strokes Julian Casablancas to his imprint on Atlantic Records, the band ultimately found their home with (Transgressive/Fat Possum). The band has been actively building their profile ever since and earning fans across 5 continents, including performances at the world’s top music festivals like Glastonbury, Bonnaroo, Roskilde, Montreaux & more, plus two appearances on the legendary UK TV program, ‘Later…with Jools Holland’. Their last album, 2017’s widely acclaimed Resistance, solidified them as an important group to watch and they’ve followed it up with consistent touring & unforgettable live performances, helping make them a force to reckon with. Already counting such luminaries as Nile Rodgers, Gary Clark Jr., Toumani Diabate, Run the Jewels, Dave Sitek, & Brittany Howard of Alabama Shakes as major fans, this band is poised to put down a unique musical footprint with their electric, eclectic & kinetic songs for years to come.

Songhoy Blues closed out 2019 with a flourish, including a sold-out run of UK dates (& this raucous affair at London’s famed St. Albert’s Hall for the Meltdown Festival); a successful N. American tour; filmed an episode of the new BBC TV program Noughts & Crosses in South Africa; were featured in the photo exhibition ‘My Rockstars’ by Hassan Hajjaj at La Maison Europeenne de la Photographie in Paris; and collaborated with UK visual artist Andy Morgan on a multimedia exhibition called Rebel Sounds at London’s Imperial War Museum, which ran from June through December. The band was also featured at last year’s Glastonbury Festival in the Life Before Borders short film that was broadcast to the festival audience and documents the hardship African artists endure to even set foot on festival stages around the world.

Songhoy Blues are proud supporters of the charities WaterAID UK, Tree Aid, and the Great Green Wall Project for Africa, for which they kicked off the United Nation’s 2019 Climate Change Week in New York City. The band have helped to raise money & awareness toward providing relief in their native Mali, and continue to fight for progress & change everywhere. 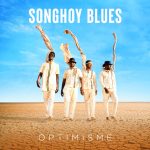 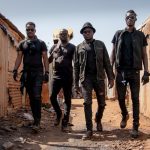 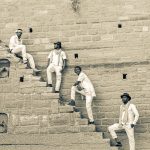 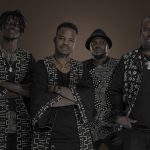 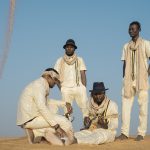 Consequence of Sound “9 Albums to Stream”